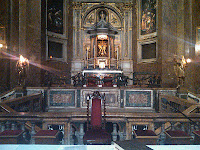 It has been weeks now since I have been to the movies. I like going to the movies. It's probably the only branch of "popular culture" that I really engage with. For one thing, one can go to a movie in the morning or the afternoon (in the U.S. at least), and (very important for me) one can go alone. So I see a lot of movies - not as many in Knoxville as I did in New York - but still a good number.

Here in Rome, there is a movie theater on the Via in Lucina (a little street near the Parliament Building, off the Via del Corso) that shows foreign films in their original language. I went there this afternoon to see The Iron Lady. getting off the bus at the Piazza San Silvestro, I stopped to visit the Pallotine Church of S. Silvestro in Capite (photo). The "head" referred to in the church's title is that of St. John the Baptist, a relic of which is displayed in a side chapel.

With Meryl Streep in the starring role, of course the acting was superb. (The actor who played Lady Thatcher's husband, Dennis, was also excellent). In the end, however, what the film finally has going for it is just that - the acting. The movie portrays Thatcher and the events of her life and career through the prism of old age and the onset of dementia, oscillating back and forth between the present reality of Thatcher in her declining years and flashbacks portraying her memories of past events. the method works well to portray both the pathos of old age and retrospective insights into historical people and events in Britain's recente past.

Those events, however, seem to serve mainly as the scenic background on which the movie paints Thatcher's character and self=understanding. That is not an uninteresting subject. Still - and perhaps I am being just very old-fashioned here - I came away feeling that the events themselves - their political, economic, and cultural significance for Britain and the world - and Mrs. Thatcher's decisive part in them were less than fully illuminated. this is a film about feelings - mainly Margaret's, also Dennis's, and also those of her colleagues. in Government and in the Conservative Party. I suspect thatcher herself would be the first to say that her feelings are much less important and interesting than the events in which she played a part and the world they helped form. this is a film about feelings not ideas, but thatcher was preeminently a person of ideas.

So we get a feel why she pursued the economic policies she did, why she transformed the Tory party into something it had never quite been before, and why she was so resolute in resisting Argenitinian aggression in the Falklands, but we get little sense of why all fo this matters in the long run. As for the end of the Cold War, in which she played a modes but significant role (especially in facilitating President Reagan's developing relationship with Gorbachev), that gets just a scant few superficial minutes. The feelings angle does, however, help illuminate one important dimension of the Thatcher story - how a "grocer's daughter" took over a traditionally aristocratic party and in the process imprinted that party with a middle-class ethos and middle-class values. That theme comes through loud and clear, and although the larger political, social, and cultural context may be left somewhat undeveloped, the movie makes clear how truly transformative this was.

The movie that explores and develops the historical significance of her tenure at Number 10 has yet to be made. Meanwhile, Meryl Streep certainly still deserves her Oscar nomination.