"An Adventure in Faith" 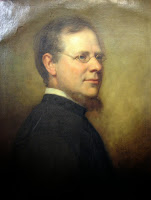 Today, December 18, is the 196th anniversary of the birth of Servant of God Isaac Hecker (1819-1888), the founder of the Paulist Fathers. On his first birthday as a Catholic, Hecker wrote: "It is my 25th birthday; here let me offer myself to Thee for Thy service oh Lord. Is it not what I should? Am I not Thine? Thou didst create me and ever has sustained me. Thine I am. Accept me oh my God as thine, a child who needst most thy love and protection" (Diary, 1844).


Not unlike Christian history’s most famous seeker, Saint Augustine, Isaac Hecker exemplifies the spiritual search at its best. Like Augustine, he examined as many as possible of the leading intellectual and religious currents of his time, before finally finding his permanent religious home in the Roman Catholic Church. The very personal story of his spiritual search, of his intense attention to his own inner spiritual sense, certainly speak to the spiritual longings of many in our own time, who identify themselves as “spiritual but not religious.” For most of the first 25 year of his life, Hecker too was “spiritual but not religious.” But Hecker did not remain that way. For Hecker, seeking was never an end in itself. The point of seeking was to find. Once the object was found, the search ceased. Hecker found fulfillment in the Catholic Church and never either regretted what he had found or desired to look farther, but rather desired to devote his life to helping others – especially other seekers, such as he himself had been – to find the truth in the Catholic Church.  “It never can be too often uttered that Catholicism means the Universal Good and True and Beautiful,” Hecker confided to his Diary on that same 25th birthday. “That is not worthy to be named Catholicism which does not embrace al truth, all Goodness, all Beauty. Our allegiance is alone due to God and to Catholicism because it is the universal revelation of God. The measure of Catholicism is the measure of Gods love to man. I am a Catholic because I would not reject any of Gods Truth.”

Thus, all of Hecker's activity after his conversion was characterized above all by his enthusiastic embrace of the Church to which his personal spiritual search had so earnestly led him, and which would in time transform him into an active, enthusiastic missionary. Hecker’s enthusiasm for his new faith and his commitment to the Church permeate all his activity and his writings – from his initial conversion experience as recorded in his Diary, through his active ministry as a priest and missionary preacher, to his final mature exposition of his theology in his last book The Church and the Age, published in 1887, the year before he died..
Hecker’s life after his conversion exemplified his enthusiastic embrace of the Church to which his  youthful spiritual seeking had led him and to which he henceforth wholeheartedly devoted himself. This commitment to the Church as the institutional expression of the presence and providential action of the Holy Spirit sustained him in his priestly ministry. Thus the opposition he encountered that led eventually to his founding the Paulists was, he wrote to his brother in 1858, “permitted by Divine Providence” to position him “to further the work of God.” In his own time and in his own circumstances, Hecker lived and witnessed to the "Joy of the Gospel," which Pope Francis is challenging the Church to live and witness to  in our own time and our own circumstances

Hecker was truly, as Edward Cardinal Egan has written, “a man of the Church,” whose life was “nothing less than an adventure in faith” (Catholic New York, November 9, 2006).