"To go forth from our comfort zone" 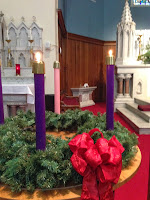 Every Advent, through the drama of the liturgy, John the Baptist emerges again from the Judean desert and assumes center stage, shouting up and down the Jordan Valley, “Repent, for the kingdom of heaven is at hand!”


For us today, John the Baptist is a somewhat mysterious and probably not very appealing figure. He appears, ever so briefly, at the beginning of Jesus’ public life; and then, before we have barely gotten to know him, gets killed. Having heard his rather shrill shout every 2nd Sunday of Advent, we’re ready right away to put him back in storage, so to speak, while we focus instead on the season’s more attractive and comforting sounds.


But Repent has always been at the heart of Advent’s message, and the fact that the Church faithfully invites John back every Advent is intended to help us appreciate again what Pope Francis had in mind in his recent Apostolic Exhortation, when he said that “all of us are asked to obey [the Lord’s] call to go forth from our own comfort zone in order to reach all the ‘peripheries’ in need of the light of the Gospel’ [EG, 20].
Evangelii Gaudium (“The Joy of the Gospel”) is the Pope’s official response to last year’s Synod on the New Evangelization. Repeating themes and phrases familiar already from his homilies and elsewhere, Evangelii Gaudium is in effect an outline of his program for his papacy. (Popes typically issue a first encyclical that summarizes and sets the tone for their papacy. But this Pope's first encyclical was actually his predecessor's last one. So this post-synodal Apostolic Exhortation became his vehicle for expressing his programmatic ideas and aims.)
Even more, it might be called his "I have a dream" speech. He actually uses the "dream" image: “I dream,” he writes, “of a ‘missionary option,’ that is, a missionary impulse capable of transforming everything, so that the Church’s customs, ways of doing things, times and schedules, language and structures can be suitably channeled for the evangelization of today’s world” [EG 27].
Clearly this is a very personal document, written very much in Francis's distinctive style, written to challenge the Church to look outside herself, so as to be more missionary. It is, after all, a document about evangelization, which inevitably requires outreach and recalibrating the Church's pastoral methods and activities to make such outreach possible and effective. There’s even a whole section telling us priests how to improve our preaching. And outreach to the poor plays an important part, along with a strong critical analysis of contemporary economic realities.
Of course, Popes have been challenging the spirit of capitalism at least since Pope Leo XIII wrote Rerum Novarum in 1891. Pope Francis is hardly here saying something unprecedented in comparison with the pronouncements of his predecessors, in particular, his most recent ones. (Just think back to Pope Benedict XVI’s 3rd encyclical Caritas in Veritate in 2009.) Francis here, however, is expressing himself in his distinctly personal style, making clear the importance he personally attaches to what he’s saying. And, very importantly, these words come not in some separate encyclical exclusively about social and economic questions but in an exhortation on evangelization.
The contemporary Church, it seems to me, has sometimes suffered from a certain compartmentalization. In the pre-conciliar liturgical movement, for example, an interest in good liturgy and a concern for social justice generally went hand-in-hand; but later they became, so to speak, separate specializations. Evangelization likewise has somehow come to be seen by some as something we think and talk about separately from all those other things. And, as we all know, there are those, who seem to strip Catholic doctrine down to talk about sex and little else, leaving the Church’s traditional teachings on social, political, and economic issues somewhere in limbo. What may be one of Pope Francis's distinctive contributions is how he seems determined to hold all these important elements of Catholic life together.
This is an Exhortation about evangelization. It is a challenge, the Pope says, to be “a Church which ‘goes forth’ ... a Church whose doors are open. It is a challenge to be a Church going out to others in order to reach the fringes of humanity” [EG 46]. To me it seems significant that the Pope’s comments on economic inequality, for example, follow directly from that challenge to “go forth.” Speaking of where and to whom to go when the Church "goes forth,” Francis takes his inspiration from Jesus’ famous instruction in the Gospel about whom to invite to a feast [Luke 14:14]. “There can be no room for doubt or for explanations which weaken so clear a message,” the Pope reminds us. “Today and always,” he says, “‘the poor are the privileged recipients of the Gospel,’ and the fact that it is freely preached to them is a sign of the kingdom that Jesus came to establish” [EG 48W] (We will hear Jesus cite the poor having the good news proclaimed to them as one of the signs that validate his mission in next Sunday’s Gospel.)
In centering economic issues at the heart of the Church's evangelizing mission, Francis righty recognizes that it is not his task “to offer a detailed and complete analysis of contemporary reality.” Rather he exhorts us all to an “ever watchful scrutiny of the signs of the times” [EG 51]. It is under that gospel guideline of scrutinizing “the signs of the times” that the consideration of poverty and inequality arises. It arises when the Church's mission of universal inclusion collides with the economics of exclusion:
“Just as the commandment ‘Thou shalt not kill’ sets a clear limit in order to safeguard the value of human life,” the Pope writes, “today we also have to say ‘thou shalt not’ to an economy of exclusion and inequality. Such an economy kills. How can it be” - the Pope asks, in what has since become one of his more famous soundbites - “that it is not a news item when an elderly homeless person dies of exposure, but it is news when the stock market loses two points?”
John the Baptist prepared the way for Christ by challenging people to recognize the reality of their lives and relearn what that life is supposed to be about.  In reminding us of the priority of society in human existence and the imperative of solidarity in human relationships, Pope Francis is challenging us to reconsider our present-day priorities in order to become the Church we are constantly called to be, a community called, as Saint Paul says, to glorify God for his mercy [Romans 15:8].
Homily for the 2nd Sunday of Advent, Immaculate Conception Church, Knoxville, TN, December 8, 2013.