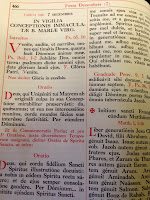 Until 1955, today would have been observed as the Vigil of the Immaculate Conception - really observed, not just with a commemoration at Mass, but widely and popularly observed as a day of fast and abstinence. (I remember one year on this date going with my sister to Macy's with my mother to buy new shoes. One of my mother's Macy's co-workers, the salesclerk who always waited on us when we got our shoes, asked what the holiday was that was causing everyone to eat fish in the restaurant across the street! That's how it was then, when liturgical arcana still occasionally intruded into ordinary people's lives! And how different it is now! How many people either remember or care now when holy days like the Immaculate Conception come up?)

“We no longer have the Vigil of the Immaculate Conception in the Liturgy. A pity – I miss all the Vigils. Why on earth were they suddenly suppressed?” Such was Thomas Merton's lament written in his journal on December 7, 1959.

The word "vigil" has multiple meanings. In the sense used here, it refers to the liturgical day preceding a major feast and dedicated to preparation for it. Previously, Christmas. Epiphany, Ascension, and Pentecost were each preceded by such a vigil, as also were the feasts of St. Andrew (November 30), St. Thomas (December 21), St. Matthias (February 24), St. John the Baptist (June 24), SS. Peter and Paul (June 29), St. James (July 25), St. Lawrence (August 10), Assumption (August 15), St. Bartholomew (August 24), St. Matthew (September 21), SS. Simon and Jude (October 28), All Saints (November 1), and Immaculate Conception (December 8). Most of them were celebrated in purple vestments, had a penitential character, and were called "fasting vigils" (although actual fasting was only observed on some of them). After 1955, the only vigils kept were those before Christmas,  Ascension, Pentecost, St. John the Baptist, SS. Peter and Paul, St. Lawrence, and Assumption. Not even the famous Vigil of All Saints ("Halloween") escaped the cut. It didn't matter much in the end. In the 1969 Missal, they would all be gone - even Christmas Eve!

No doubt the origin of the more ancient vigils lay in an actual night-long watch (vestigially preserved to this day in our Easter Vigil). The ancient vigils' evolution into a penitential observance on the previous day may have seemed like a medieval innovation to the more archeologically inclined liturgical reformers. Perhaps too the simultaneous elimination (for most practical purposes) of fasting and abstinence from Catholic life in the 1960s made the vigils seem somewhat emptied of purpose. Perhaps it was felt that they just didn't resonate any more with a modern mentality. (But what does? Do liturgical colors? And what about epicleses and anamneses? How many people know or care about those either?) Whatever the justification, yet another link between the formal liturgy and the rhythm of time was eliminated.

Admittedly, the traditional notion of liturgical preparation did usually involve penitential practices like fasting. Without fasting, maybe vigils really don't make much sense. Still, one wonders whether we wouldn't be well served by rediscovering the idea of preparation. We've become very good at anticipation. We anticipate Sunday on Saturday afternoon. We anticipate Christmas for weeks before (not to mention the growing liturgical phenomenon of transforming Christmas Eve - a fast day as late as 50 years ago - into an anticipated substitute for Christmas Day). Preparation however, is something else again.

Restoring all the old vigils would itself be an exercise in liturgical archeology. Those wonderful old vigils may be yet another example of what Pope Francis, in his recent Apostolic Exhortation, referred to as customs, which "may be beautiful, but they no longer serve as means of communicating the Gospel" (Evangelii Gaudium, 43).

Like it or not, the sad reality is that most of the feasts that vigils were once attached to are themselves hardly much noticed anymore. Culturally and spiritually that may be a loss, but a loss that must be accepted. On the other hand, perhaps for at least some occasions that still have some real resonance - a patronal feast here or there, Halloween/All Saints, Our Lady of Guadalupe - something creative could be done in preparation. Admittedly, it's a minor matter, and there are much more important things to be concerned about. But as part of our heritage from when liturgy intruded into ordinary life, perhaps someday some modest fragments from that heritage might still somehow be salvageable.