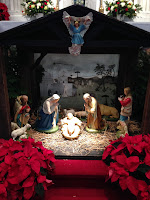 
As Pope Francis has said, “the love of God, once welcomed becomes the most formidable means of transforming our lives and relationships with others, opening us to solidarity and to genuine sharing” [2014 World Day of Peace Message].


For, as St. Paul wrote in his letter to Titus: The grace of God has appeared, saving all and training us to reject godless ways and worldly desires and to live temperately, justly, and devoutly in this age, as we await the blessed hope, the appearance of the glory of our great God and savior Jesus Christ.
So every time we come up this hill to this bright and beautiful church to hear this Christmas story, may it truly become our story. May it challenge us to bring the brightness and beauty we experience in this church with us back down the hill and so to re-imagine our world – and so transform our frustration into fulfillment, our sadness into joy, our hatred into love, our loneliness into community, our rivals and competitors into brothers and sisters, and our inevitable death into eternal life.