An Example of the Power of Grace 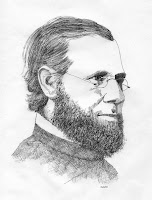 Today is the 125th anniversary of the death of Servant of God isaac Hecker (1819-1888), the founder of the Paulist Fathers.

Having founded the Paulists in 1858, Hecker immediately began more than decade of intense activity. His priorities as New York parish pastor and Paulist Superior during this period were pastoral and missionary work, ultimately oriented to the evangelization of American society. As he wrote in January 1860, “By degrees I find my future work open up before me. I begin to see into the future, and feel impressed that God will in His providence make use of our community for the conversion of this country.” Throughout this period (and indeed the rest of his life) Hecker remained convinced, as he wrote to Orestes Brownson in 1870, “that religion is the basis of all society, and its dogmas the foundation of all political principles.”

In his preaching, lecturing, and writing, Isaac Hecker self-consciously sought and promoted images and models of holiness which he believed resonated well within the new context created by what he saw happening in the modern world. An excellent example of this is his often quoted 1863 St. Joseph’s Day sermon, The Saint of Our Day. Just as every secular age has its own characteristics, expressed in its art, science, and politics, likewise in the Church, Hecker argued, “There is something about the sanctity of each age peculiar to itself.” Consistent with his theology of the Church and his understanding of the role of free individuals in modern society, he constantly sought to promote an understanding of and devotion to the Church, which would be consistent with the kind of contemporary holiness he believed most relevant for the circumstances of the modern age. Speaking of his own time, Hecker observed, “Our age lives in its busy marts, in counting-rooms, in work-shops, in homes, and in the varied relations that form human society, and it is into these that sanctity is to be introduced.”

Hecker’s exuberant confidence during this period in the church’s triumphant future reflected his own spiritual experience of God’s providence in his life, which he memorably expressed in an 1864 letter reflecting on the 20th anniversary of his baptism: “To me my life has been one continued growth; and hence I have never had any desire to return to any part or period of it. This applies as well to my life before I was received into the Church as after. My best life was always in the present. … In looking back on this lapse of time, I find no step to regret, and those of importance in their bearing on my life seem to me now providential. I cannot do better than trust to that guidance which has brought me thus far, to be its agent.”

Looking back on Hecker’s ideas from the vantage point of the present, we can appreciate his consistent commitment to call American Catholics to the fullness of their mission to evangelize their society and – to that end - to enhance the quality of Church life, to build up the Catholic Church in the United States, just as the Paulist church and parish were being built up in New York City. St. Paul the Apostle Parish’s early emphases on liturgy and preaching were clear examples of that commitment to the qualitative enhancement of American Catholic communal life. We are even more apt to appreciate today the importance of internal Church community life for the effectiveness of its mission outward to society. As Rodney Stark, for example, has argued in his analysis of the growth of early Christianity, “social networks are the basic mechanism through which conversion takes place., Stark also noted that most religions “draw their converts mainly from the ranks of the religiously inactive or alienated.” [Cities of God: The Real Story of How Christianity Became an Urban Movement and Conquered Rome, HarperCollins, 2006]

Although Hecker remained Paulist General Superior and parish pastor from 1858 through his death in 1888, the last period of Hecker’s life was dominated by physical illness and suffering. So, from 1872 on, Augustine Hewit increasingly bore the burden of shepherding the fledgling Paulist Community, while one of the other Paulists served as acting pastor of the New York parish. Thus, not unlike the experience of some other religious founders - St. Francis of Assisi (1181-1226) in the 13th century, St. Alphonsus Liguori (1696-1787), the founder of the Redemptorists, in the 18th, and Blessed Jeanne Jugan (1792-1879), the foundress of the Little Sisters of the Poor, in Hecker’s own 19th century, Hecker’s last years saw a reduction in ministerial activity that challenged him to surrender himself totally to the Lord. Sickness and suffering are complex human experiences, which elicit different reactions and responses in different people. In Hecker’s case, unwanted sickness and suffering served to help his final spiritual maturation in response to God’s grace, deepening his relationship with the Lord and broadening his evangelizing zeal even as his apostolic activity was curtailed.

Even so, during this time he continued to contribute to The Catholic World, for example, and even attended (briefly) the Third Plenary Council of Baltimore in 1884. Throughout the 1880s, Hecker engaged in written polemics on issues of great contemporary importance to the Catholic community. In conspicuous contrast to the secular press, he strongly supported the Papacy in its ongoing dispute with the Kingdom of Italy (“the Roman Question”), and he pressed forcefully for Catholics’ right to run their own separate school system.

The Church and the Age (1887) was Hecker’s final and mature formulation of his core convictions about the Church and the contemporary world in general and in particular the vexing question of Church and State - specifically in the United States, Italy, and France (the latter two being the countries where Church-State relations were persistently neuralgic in Hecker’s lifetime and also where such issues had the most immediate impact on the concerns of the government of the Universal Church).  The Church and the Age also offers Hecker’s mature insights on his life-long preoccupation with the relationship between the interior action of the Holy Spirit within the individual and the external authority of the Church.

Hecker’s illness, however, focused him on the one thing most important – his relationship with God – always a greater and more important thing than anything one does in life. In sentiments that recall St. Thomas Aquinas’ famous experience shortly before his own death, Hecker expressed his own experience to his close companion and disciple, Paulist Father Walter Elliott: “There was once a priest who had been very active for God, until at last God gave him a knowledge of the Divine Majesty. After seeing the majesty of God that priest felt very strange and was much humbled, and knew how little a thing he was in comparison with God.”

Finally on December 22, 1888, Isaac Hecker died. In his eulogy at the funeral four days later, the Jesuit Provincial recounted the scene at Hecker’s deathbed, when his fellow Paulists asked for his final blessing. Hecker “aroused himself from the depth of pain and exhaustion, and his ashen lips which death was sealing pronounced the singular words … “I will give it in the shadow of death.” His feeble hands were raised, and like a soldier dying on the field of battle he reconsecrated his followers in the name of the Father, Son, and Holy Ghost for the struggle in which they had chosen him as Leader.”

In the early Church (and for some time thereafter), one of the major moments in the development of devotion to a holy figure was the official transfer of his or her relics to a more noteworthy location. In a kind of modern echo of that ancient and medieval practice of elevatio et translato, the community of the faithful centered around Hecker’s church in New York gathered on January 24, 1959, to transfer Hecker’s remains to a magnificent new tomb, the work of American artist and sculptor Lumen Martin Winter.

The  transfer  was conducted with great solemnity, led by the Superior General of the Paulist Fathers and accompanied by a Knights of Columbus Honor Guard from Manhattan, the Bronx, Queens, and Staten Island. His body was removed from the Paulist Fathers’ Crypt, placed in a new coffin, then solemnly carried up the steps and into the church, where a Pontifical Requiem Mass was sung by Bishop Edward V. Dargin, Auxiliary Bishop and Vicar General of the Archdiocese of New York. At the end of that Mass, a sermon was preached by Bishop Philip J. Furlong, Auxiliary Bishop of New York and Delegate to the Military Ordinariate.

“But what,” asked the Bishop, ”was there about the man, his background, and upbringing, his achievements, that would explain why almost a century and a half after his birth a great congregation would be gathered in this noble church, itself world famous for the treasures that are part of its very fabric, to do honor to him? The answer is not to be found in the ways of men; rather here is an example of the power of divine grace.”

Summarizing Hecker’s legacy, Bishop Furlong proclaimed: “In the fellowship of the Saints, as St. Paul proclaimed it, Father Hecker recognized a call to his followers to make their influence felt so that America would become Catholic. … The vocation to participate in this mission was to be shared alike by the priests of his Congregation and the people. All this, to be effective, must rest upon the personal sanctification of the individual Catholic. And the way of this – so simple, Saint Paul’s way: ‘For me to live is Christ’.”