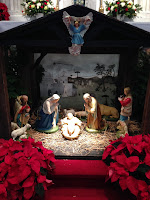 "Today you will know the Lord is coming, and in the morning you will see his glory (Invitatory for Christmas Eve). In the traditional - pre-1969 - liturgy, not only the Office but today's Mass also began with those words. The verse is based on Exodus 16:6-7 (So Moses and Aaron told all the Israelites: "At evening you will know that it was the Lord who brought you out of the land of Egypt; and in the morning you will see the glory of the Lord, as he heeds your rumbling against him"). Along with the famous verse from Wisdom that used to serve as the Introit for the Sunday after Christmas and now performs that function on December 30 (When a profound silence covered all things and night was in the midst of its course, your all-powerful Word, O Lord, bounded from heaven's royal throne, Wisdom 18:14-15), these now Christmas-associated Old Testament verses did not originally refer to the Incarnation. But they do highlight God's awesome and terrifying intervention in human affairs for the sake of his people, a good symbolic foreshadowing of the Incarnation. To be sure, Christmas is a sentimental, feel-good feast, but it is also an awesome one (in the traditional meaning of that word), and we do well to make room for both dimensions - the sentimental and the awesome - in our celebrations,

The traditional liturgical Vigil of Christmas also did that rather well. Like all the other vigils that used to mark the Catholic calendar, the Vigil of Christmas no longer exists liturgically. Even so its spirit still survives somewhat outside the official liturgy in the spiritual feeling of this day (and, of course, in some randomly surviving cultural remnants, e.g. the traditional Christmas Eve fish dinner).

As the eminent Pius Parsch pointed out, Christmas Eve was not a vigil in the old Roman sense of an anticipated night-watch. It was rather "a fore-feast after the Greek style." Thanks to the wholesale abandonment of vigils in the liturgical reform, all of that is now lost. One rather surprising survival, however, is the popularity of the solemn proclamation of the feast of Christmas originally from the Roman Martyrology. The reading of the Martyrology used to have its place in the Office of Prime. With the abolition of Prime, the Martyrology was rendered somewhat homeless. Surprisingly, however, the solemn proclamation of Christmas, which was largely unknown to most lay Catholics when it was still part of Prime on Christmas Eve morning has now gotten a new lease on life. It often as a special introduction to the Christmas Midnight Mass. Well done, it makes for a very good introduction. In an era of invented pseudo-traditions, this one seems surprisingly successful. (In a gesture to contemporary scientific sensibilities, the traditional dates have been fudged in the contemporary rendering - e.g., "the 5199th year since the creation of the world" becomes "when ages beyond number had run their course from the creation of the world." The original is more poetic perhaps, but not distracting people from the point of the proclamation with what may sound to some like pseudo-science also has its merits!)

While originally intended for Christmas Eve morning, the Martyrology's "Christmas Proclamation" (as it is now commonly called) is very appropriate to its new setting. Sung before Midnight Mass, it still belongs, at least technically, to Christmas Eve and really does capture completely what Christmas Eve as a classic "fore-feast" was all about. It situates the Incarnation where it belongs - in the grand sweep of human history and the providential plan of what we call "salvation history."

THE TWENTY-FITH DAY OF DECEMBER:
In the 5199th year since the creation of the world,
when in the beginning God made heaven and earth,
the 2957th year since the Flood,
the 2015th year since the birth of Abraham,
the 1510th year since Moses and the going forth of the people of Israel from Egypt,
the 1032nd year since David's royal anointing,
in the 65th week, according tot he prophecy of Daniel;
in the 194th Olympiad,
the 752nd year of the rule of Octavian Augustus, all the earth being at peace,
in the sixth age of the world,
JESUS CHRIST, eternal God and Son of the eternal Father,
desiring to sanctify the world by his most merciful coming,
being conceived by the Holy Spirit and nine moths having passed since his conception,
WAS BORN IN BEHTLEHEM OF JUDA,
MADE MAN OF THE VIRGIN MARY,
The nativity of Our Lord Jesus Christ according to the flesh.