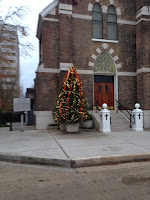 Nolite timere: quinta enim die veniet ad vos Dominus noster. ("Fear not: for on the fifth day our Lord will come to you").
In the commercial shopping universe, the countdown has been going on for weeks. "Only 5 (shopping) days left till Christmas," continues the relentless refrain that began on Thanksgiving, if not before. But, in the Church's calendar, only once does such a countdown (minus the "shopping" reference, of course) appear. On December 21, the antiphon at the Benedictus bids us "Fear not, for on the fifth day our Lord will come to you." Unlike the shopping countdown, which seems intended to intensify anxiety as Christmas approaches (lest I face it with my shopping still incomplete), the Church's one-time countdown commands the opposite: "Fear not."
It's a mystery to me why December 21 was singled out for this, why only 5 days left till Christmas merited such attention - unlike, say, the 40th day before Christmas, or the 9th, or the 7th, or even the 3rd (all numbers with traditional religious resonance). I really don't think, though, that the number is the key here. I don't think the point is "Fear not" because it's just 5 days to go instead of 6! I think the point is rather that the time has come, and so we should take to heart that traditional biblical greeting and "Fear not."

Easier said than done, of course, given our world-wide economic woes, our national political dysfunction, and - closer to home - the perennial personal problems that periodically punch each one of us in the stomach without regard to timing! But then that is the point really. The biblical "Fear not" was not addressed to the well off, the safe, the comfortable. It was addressed to those who might have good reasons, humanly speaking, to be afraid. Christmas comes - not just five days from now but all the time - to a frightened world full of frightened people, whose only reason not to be afraid, really, is the good news that is at the heart of the Christmas story: our Lord really has come to us!