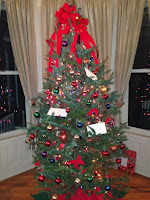 I read somewhere that on this date in 1869, there was anxiety in the Roman Basilicas that the singing of today's Magnificat antiphon (O Emmanuel) at Vespers might trigger popular demonstrations in support of the Piedmontese King Victor Emmanuel II, the poster-boy for the unification of Italy. Well, whatever did or didn't  happen in the Roman Basilicas on that December 23, 1869, nine months later on September 20, 1870, Victor Emmanuel's army finally entered Rome - conquering it or liberating it, according to one's perspective, and providing a united Kingdom of Italy with its long-desired capital.

The long-desired Emmanuel of today's antiphon, whose advent we celebrate at Christmas, reigns over a greater and more permanent kingdom. His coming constitutes the greatest possible joy for the world. But as the anxiety that gripped Rome that Christmas reminds us, our joyous celebration of the coming of Christ cannot completely escape the concerns and anxieties that afflict our political world and our personal lives.

To my mind that is one reason for the enduring popularity of that Judy Garland Christmas classic, Have Yourself a Merry Little Christmas. In the 1944 musical Meet Me in St. Louis, Judy Garland sings Have Yourself a Merry Little Christmas to her sad little sister. The girl's sadness has to do with the family's plans to relocate to another city. But the date - 1944 - recalls another, greater sadness, the separation and dislocation caused by World War II. It is said that Judy Garland's performance of the song at the Hollywood Canteen brought soldiers to tears. That's easy enough to believe, since the song still has that effect on me whenever I hear it now.

Christmas is a transcendently happy occasion, but we celebrate it in a world of woe. While we all want our Christmases to be perfect, reality regularly intrudes. That perfect Christmas-card family picture is a way of saying to the world (and maybe reassuring ourselves) that everything is really OK. In fact, however, and not just in movies, Christmas is often celebrated in less than optimal conditions – by those (like Mary and Joseph) who are homeless and have only strangers for company, by the lonely and those who mourn, by the sick in hospitals, by immigrants far from home, by refugees in temporary camps that have a way of becoming permanent, by soldiers at war (like my own father, 69 years ago, fighting with the 186th Field Artillery Battalion at the Battle of the Bulge, in what one historian called “the worst Christmas for American soldiers since Valley Forge”).

Christmas does not deny those realities. Rather, it heralds the hope that gets us through those realities and takes us beyond them. That hope, that is the key to Christmas, keeps Christmas coming year after year, in good times and in bad.


Once again as in olden days
Happy golden days of yore
Faithful friends who were dear to us
Will be near to us once more
Someday soon, we all will be together
If the fates allow
Until then, we'll have to muddle through somehow
So have yourself a merry little Christmas now