Recalling Christmases Past and Present 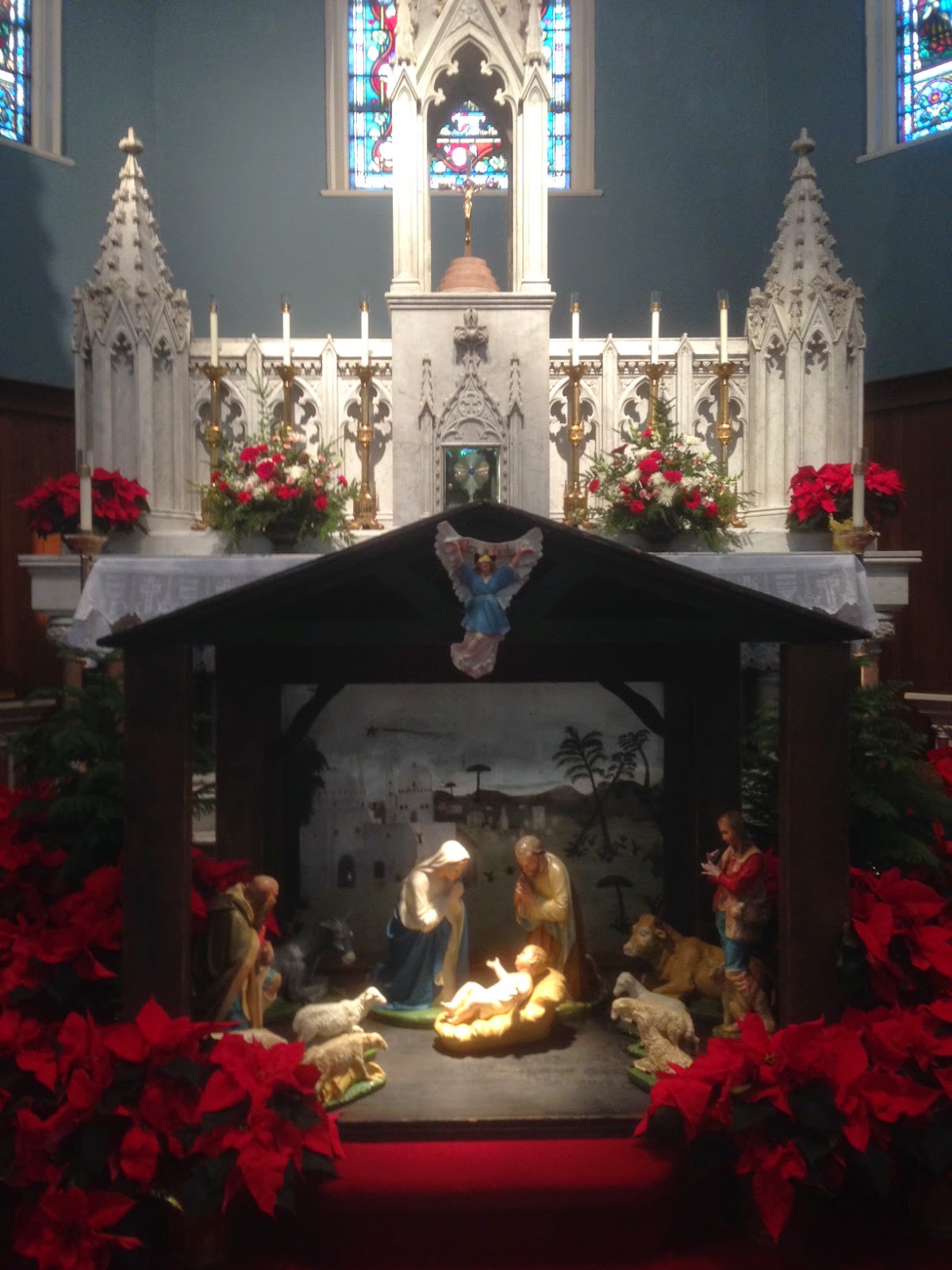 After the Masses during the Night, some sleep, and the morning Mass, my religious brothers and I went out for a convivial Christmas dinner yesterday. Then came quiet time - time to catch one's breath, watch some Christmas programs on TV, make the all-important Christmas phone call to the West Coast, etc - basically some time to sit with myself in the lingering peace and beauty of that most peaceful and beautiful day. Spent alone like that, Christmas afternoon and evening inevitably invite reminiscences - rich recollections of Christmases past. We all have such memories. They flood our consciousness at this time of year, and help define how the holiday speaks to us.

I remember boyhood Christmases in the Bronx in the 1950s - getting up very early to see what gifts Santa had brought, sitting under the tree amid a pile of presents and a mess of torn wrapping paper, then getting dressed and going to Christmas morning Mass. After that, in the earlier years, came the New York Central Railroad trip to my uncle's house in Westchester, where my mother's side of the family gathered for Christmas dinner (to be followed by further visits with my father's side of the family later during Christmas week and on New year's Eve). As the years passed, one sister and then another joined the Christmas morning scene under the tree. In time too my father bought a car, and so we would then drive to my uncle's instead of taking the train.

I remember also as an altar boy serving one of the regularly scheduled Christmas morning Masses in church, and then inevitably getting pulled aside after Mass to serve one or more other side altar Masses, as all the priests in the community celebrated not the usual one but three Masses that special day.

I remember being nine years old and attending a funeral on Christmas Eve for a schoolmate's brother.

And I remember the anticipation Christmas always created - like the incredible activity that went into baking the traditional Sicilian Christmas cakes every December, some of which got packaged and shipped to far-off relatives and family friends. Then came the excitement of getting out the decorations and Christmas lights and buying a tree. And how the various creche scenes at home, at school, and at church always captivated my imagination, each different nativity scene speaking its distinctive idiom and message.

I remember too the anxiety gift-buying invariably induced in me, which it still sort of does (solved today, however, by giving mainly money and gift cards). I never seemed quite sure what to get people and whether they would like whatever I got them. And I can even remember sometimes getting gifts myself that I didn't particularly care for or couldn't really use for one reason or other, but always carefully pretending to be pleased so as not to hurt the gift-giver's feelings or appear ungrateful myself.

I remember getting older and the disruptions of those transitions in those turbulent times. Eventually all the locations of the particular parts of the familiar Christmas rituals changed. Little actually remained the same - except Christmas itself, its enduring significance speaking louder than the disruptive forces of ephemeral change.

I remember a very special Christmas - Christmas 1981 in the novitiate - an absolutely unique experience with seven other novices and three priests, a day that encapsulated many of the tense struggles and terrific joys of the novitiate experience in our precious "1100 acres of rocks and trees" in northern New Jersey.

I remember Christmas 1986 in Grand Rapids - perhaps my saddest Christmas ever. Even so what I remember most is happy - Christmas Day afternoon and evening spent in the Grand Rapids common room in friendly conversation with a certain older priest (now sadly in a nursing home).

I remember five Christmas mornings in Toronto celebrating the Missa in Aurora for the Italian community, doing my best with the language of my ancestors. I remember too the last of those Toronto Christmas Days, when I could not find any food at all in the house refrigerator, and so went for a long walk around the neighborhood, eventually stopping in a Second Cup that I was surprised to find open and there making my substitute Christmas dinner out of a cappuccino and a scone. I remember too asking the waiter whether he minded having to work on Christmas, only to be told how much he loved getting the extra holiday pay!

I remember my first Christmas Eve back in New York, celebrating the Children's Mass, and then later that night the excitement of concelebrating Midnight Mass in Hecker's great church and the awe I found myself feeling after kissing the altar and looking down the nave at the amazing crowd that offered the closest impression to the crowds that church was meant to hold and at one time regularly did hold!

I remember feeling that excitement again and again over a succession of 10 such Midnight Masses. I remember too the happy Christmas Eve dinners I enjoyed in subsequent years in NY with the present pastor and his predecessor and the Christmas Day dinner outings orchestrated by the late Fr. Dennis (of blessed memory).

Christmas dinners come and go, presents increase and diminish, friends and loved ones may be near or far away. Yet Christmas continues to come and work its singular grace in all who, wherever and however they find themselves, listen to the angels' song and seek (however, feebly) to sing it themselves.