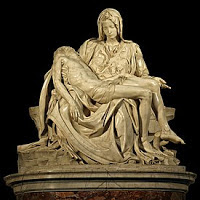 One week ago, in his daily morning homily on the traditional date of the feast of Our Lady of Sorrows, Pope Francis recalled the centuries-old devotion to Mary at the foot of the Cross, a devotion which acquired an added significance in the medieval Church at a time characterized by world-wide suffering and death – in particular that caused by the great plagues that decimated society from the 14th century onward.

In what seems like an eternity ago (although actually little more than a month ago), when we could come together still as a community to walk the Way of the Cross with Mary and with one another, we would contemplate Mary’s encounter with Jesus on his way to his crucifixion and her presence there throughout it all until she helped lay his body in the tomb. And we would sing the familiar 13th-century hymn Stabat Mater, which was originally a Sequence sung at Mass on the feast of Our Lady of Sorrows.

In the gospel account which we have just heard, we contemplate with empathy Mary’s presence at the foot of the Cross and the role she assumed there as Mother of the church. In his Passion, Mary accompanied Jesus as his disciple, modeling that role for us through her unique relationship with him and her role as Mother, sharing in his passion and death on our behalf. Again, it will be as Mother of the Risen Jesus that she will join in prayer with the disciples after Easter. With her, we participate in the experience of Christ’s Cross so as to share together in its benefits in the community of the Risen Christ.

In her suffering and sorrow, Mary exemplifies the Church – suffering and sorrowful in this terrible time of widespread sickness and death and of separation and loneliness.
As the thrust of the soldier’s lance into Jesus’ side certified, Jesus really died on the cross. Then, bound with burial cloths according to the custom, his body was buried – all of which should then have been the end of the story.

And yet this is not some sort of funeral service. If Jesus had in fact remained dead, if his body had indeed decayed in the tomb, then none of us would have any reason to remember this day at all. Nor are we acting in a play, pretending he’s dead until we see what (if anything) happens on Sunday. We are doing this today because he really did die, but really isn’t dead anymore. And that is why we celebrate the cross of Christ.

As St. John Chrysostom expressed it, some 16 centuries ago:

Before, the cross was synonymous with condemnation; now it is an object of honor. Before, a symbol of death; now the means of salvation. It has been the source of countless blessings for us: it has delivered us from error, it has shone on us when we were in darkness. We were vanquished, yet it reconciles us with God. We were foes, yet it has regained God’s friendship for us. We were estranged, yet it has brought us back to him.

In a short while, we will solemnly salute the cross, on which hung the salvation of the world, for each one of us is challenged as a disciple to realign his or her life, to model one’s life, as Mary did, on the mystery of Christ’s cross - despite the difficulties and obstacles life puts in the way. We will venerate the cross, together as the community of Christ’s holy Catholic Church - born on the cross in the blood and water which flowed out from Jesus’ side as a sign of the Church’s sacramental life and mission - because it is together as Christ’s Church (united with Mary, the Mother of the Church) that we continue Christ’s life and mission, effectively extending the reach of his cross into the whole world. That is why, following one of the most ancient traditions of this day, we will pray for that whole world – for the Church, for its leaders, for those joining the Church, for those outside, for our political leaders, for those suffering from this pandemic, and for all in any kind of need – for the whole world without exception.

Passing through life this way, standing by the cross of Jesus, we have been reborn as his Church in his blood and water, through which the Easter promise of salvation will flow, in a torrent, from his side to fill our entire world.