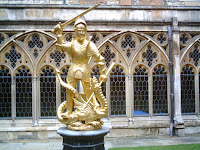 Today is Saint George’s Day, hence the Onomastico (Name Day) of Pope Francis, whose baptismal name is Jorge.. Saint George is, most famously, the patron saint of England, the flag of which is the red cross of Saint George on a white field. (George is thus one of the 4 patrons of the United Kingdom - along with Scotland's Andrew, Wales's David, and Ireland's Patrick, three of whom are represented in the UK's Union Flag).

All we know for certain about Saint George himself is that he was a Roman soldier martyred in the East during the persecution of Diocletian at the beginning of the 4th century. Devotion to Saint George is very ancient, and he was widely venerated in both East and West long before the martyred Roman soldier was turned into a medieval knight. Medieval tradition imaginatively portrayed Saint George as a gallant knight who killed a monstrous dragon. In the Book of Revelation, the Dragon is, of course, the classic image of Satan, the Devil, against whom, as Pope Francis himself has so frequently reminded us, the Christian life is a continuous battle. In his Sermon on Saint George, which is read in the Liturgy of the Hours today, Saint Peter Damian describes Saint George as "consumed with the fire of the Holy Spirit," someone who "overcame the prince of all wicked spirits, and encouraged other soldiers of Christ to perform brave deeds in his cause."

Celebrating Saint George's Day also reminds me of one of my happiest experiences, which was my summer sabbatical at Saint George's House, Windsor Castle, 15 years ago in 2005. Windsor Castle is home, of course, to the late-medieval high Gothic Saint George's Chapel, which is both a "Royal Peculiar" and the chapel of the Most Noble Order of the Garter. The Garter Knights' stalls, complete with each knight's banner, were where we sat twice each day for Morning Prayer and Evensong during my month at Windsor. It was an experience of Anglicanism both at its best and in its increasing complexity.. It was an unusual experience for me - as both an American and a Roman Catholics - and I can only be grateful for that eye-opening opportunity and for the wonderful fellowship I got to experience there with my dozen or so "classmates" and with the Canons of Saint George's. In these difficult times, happy memories of good experienced and valued relationships are all the more to be cherished.