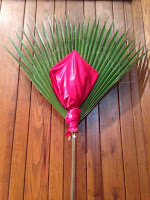 There is a scene somewhere in The Godfather: Part 2 (1974), when Vito Corleone and his young family, while visiting Sicily (in order for Vito to exact revenge on the Don who had years earlier murdered his father), are portrayed outside a church holding palms. Where else would any self-respecting Don be seen on Palm Sunday? That scene certainly testifies to the symbolic hold of Palm Sunday in the Catholic imagination!

Holy Week is a profound sacramental. It is so much more than a prolonged passion play, some dramatic re-enactment of long-ago events. Even so, not unlike the devotion of the Way of the Cross, historically Holy Week evolved in part as a stretching out of the Easter mystery over time to experience through celebrating at special times what pilgrims in Israel experience through being present at special places.

And so it is that two millennia later we still recall Christ’s entry into Jerusalem on Palm Sunday, as if we too were with the crowd that accompanied Jesus to Jerusalem and acclaimed him there with their Hosannas. As I remember Palm Sunday growing up, getting one's palms was, without doubt, the big thing. The Solemn Blessing and the Solemn Mass that accompanied it attracted the usual limited Sunday High Mass attendance. But, quite oblivious to that (and to the Procession which was supposed to be the primary point of blessing the palms), most people got their palms at an earlier or later Low Mass. and, even in those years of significant Sunday Mass attendance, people showed up to get palms who hadn't necessarily been there the Sunday before.

The Roman Rite was actually a latecomer to this focus on the palms. Before it got Gallicanized, the ancient Roman Rite focused primarily not on the palms but on the proclamation of the Passion according to Matthew. That gave us the other unique feature of Palm Sunday - the reading (or, preferably, singing by three deacons) of the Passion account. So, if you came just once a year to pick up your palm at the end of Mass, you sort of earned it by having to stand for the lengthy Passion reading.

The modern Palm Sunday rite retains this duality - a joyful celebration of Christ's triumphal entry into Jerusalem, followed by the account of where that journey intentionally took Jesus - to the Cross and to the tomb. The 1955 reform highlighted this duality at the Solemn Mass by using red vestments for the palm blessing and procession (on the historically uncertain theory that red was used in medieval Gaul) and then reverting to regular Lenten purple (properly called violet) for the Mass. The post-conciliar abhorrence of complexity and non-verbal symbolism returned to using only one color, but opted for red rather than purple. Somewhat jarringly, however, this usage visually separates the palms - and now also the Passion - from the rest of the Lenten season that has theoretically been building up to this week. If and when we reform Holy Week again, perhaps this will be corrected and the consistency of the Lenten purple will be restored. Then the connection of our individual and communal Lenten journeys with Jesus' journey to the Cross and the (eventually) empty tomb may again become clearer .

To be fair, the monitio with which the present rite begins attempts to make the connection  in its typically didactic way. It starts "since the beginning of Lent until now," but that sounds almost like an aside, compared with the very visible discontinuity with Lent which is suggested by the change in the color of the vestments.

Furthermore, by combining the blessing of palms with the Mass of the Passion at not just one but at all public Masses on this day, the contemporary rite has made Palm Sunday confusingly complicated and burdensomely long (too long for the inevitably abridged homily to adequately address all the complications).

In recent years I have also noticed another odd and potentially more problematic development. Perhaps unaware of what to do with their palms after Mass, more and more people leave them behind. (And, of course, since so many people now come late to Mass, many may miss the palm blessing altogether and then may or may not trouble to pick up a palm as they leave.)

Still, Palm Sunday remains popular, and many will very much miss getting their palms this year. For those most intimately involved with conducting the ceremony, however, since this year they will not be navigating its complicated choreography, nor fretting about the supply of palms or the collision between back-to-back rushed and repetitive services, this might be an occasion to reflect anew on Christ's journey to Jerusalem and how our individual and communal Lenten journeys are meant to align us with his journey, a focus so easily lost in the rush to get through so many words so many times in one day.
Posted by City Father