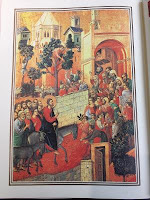 Years ago when I was studying in Israel, my former novice director took me to a village in Samaria (on the so-called West Bank) for the First Mass of a newly ordained local Arab priest. We found everyone gathered at the village boundary, around an arch of palm branches and balloons, waiting there for the new priest to enter his hometown. As the procession began and all the villagers started shouting and waving palms in the air, my guide said to me, "now you see what Palm Sunday looked like!"

For centuries, pilgrims have eagerly sought that sense of direct connection with the holy places and the great events that happened there. The presence of Stations of the Cross in every Latin Catholic church testifies to this desire to bring that connection home. And, not unlike the Way of the Cross, historically Holy Week evolved in part as a stretching out of the Easter story over time to experience - through celebrating at special times - what pilgrims in Israel experience through being present at special places. And so it is that two millennia later we still re-enact Christ’s entry into Jerusalem on Palm Sunday.

But not this year – or, at least, not in the way we are used to. Thankfully, we still sang some of that wonderful 9th-century hymn which Theodulph, the Bishop of Orleans, composed for this very occasion around the year 810. But no procession this year – and, for most of us, no palms.

Even so, we still have the story, and that story still speaks, if anything that much louder for having to speak alone to a world that has gone unnaturally silent.

The Gospel read at the beginning of this Sunday’s Mass recalls Jesus’ journey to Jerusalem for the Passover holiday and his triumphal entry into the Holy City.

But then the rest of the story, which we have just heard, reveals the next phase of that journey – to the cross and to the tomb.

Recently, we have seen those powerful images of Pope Francis venerating Rome’s famous “Plague Crucifix,” first at its regular home in the Church of San Marcello al Corso and later more publicly in Saint Peter’s Square.

Christ’s cross stands as the central symbol of Christianity, because the cross is precisely where we meet God in our world, just as the tomb – the eventually empty tomb – shows where he is taking us, where we will now watch and wait with Mary Magdalene and the other disciples.

Meeting Christ on the cross we somehow sense a new connection with God that we would hardly have felt otherwise.

Jesus is God’s way of participating in our human world of suffering and death, God’s great act of solidarity with us in our day-to-day suffering and our final mortality.

In his Passion, Jesus confronted, once and for all, the power of evil in the world. Having done so, he invites us this week to accompany him to the cross and to the tomb – because, thanks to the cross of Christ, suffering and death will no longer have the final word in our world.