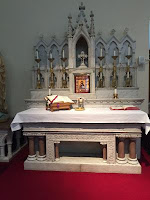 When I was an altar boy back in the late 1950s-early 1960s, it was quite common to serve Mass at a "side altar," for a priest celebrating Mass without a congregation. In those days, it was more or less the norm that every priest said Mass every day. And so, especially on weekdays, priests not needed for one of the "public" Masses at the main altar or one of the convent Masses for the sisters who taught in the parish schools, usually said Mass on one of the side altars - with a server if possible, sometimes without. By the time I entered religious life two decades later, changes in popular piety and priestly spirituality, along with some somewhat more problematic trends in academic theology, had created a very different environment in which such "private" celebrations, while remaining unambiguously legal and even officially encouraged (cf. canon 904), had become far less common and were, in some circles certainly, frowned upon. I never accepted the nihilistic ideology that may have motivated at least some of that frowning. But I was certainly inevitably influenced (as everyone has been) by the experience of celebrating Mass versus populum, with the result that it was hard to find the experience of celebrating Mass without a congregation very satisfying. Until recently, the only times I have done so were either to fulfill my obligation to renew the hosts in our house community chapel, or to fulfill my obligation to offer a Mass for a recently deceased member of my community, or for some analogous special need.

Then came the pandemic. Suddenly gatherings of all sorts ceased, among them public Masses. Suddenly I found myself celebrating Mass alone on a daily basis. On Sundays, we broadcast the Mass via Facebook, so I have a tiny congregation of assistants participating in person and a (hopefully) larger virtual one. On other days, however, I am on my own at a side altar, celebrating Mass all by myself.

Both experiences have been a bit awkward and have required some considerable emotional adaptation and adjustment. I definitely do miss the people's presence and would not normally choose either experience in preference to Mass with a congregation. Even so, the experience of celebrating Mass "alone" has proved much more spiritually satisfying than I might have expected - in part, because I do not feel completely "alone."

Perhaps that is due to the unique circumstances in which this is all taking place. I am constantly conscious of the almost apocalyptic crisis that is occurring and its impact on people all over the world. Unless circumstances require me to offer the Mass for some other specific intention, I offer it most days for the health and safety of my parishioners, family, and friends. And, in doing so, I do feel genuinely connected to them through that experience. Indeed, I feel much more connected to them then, during Mass, than at any other time of the day - more so even than when talking to someone on the phone or discussing pastoral issues in a zoom meeting.

Also, this has been a wholesome reminder that Mass is about a lot more than just getting together, however much we may rightly value that experience. It is a good counter to the creeping, crypto-congregationalism that increasingly afflicts American religion. It reminds me that the liturgy unites us with the whole Church - physically present and not - unites us across time and space, across time back through centuries of Christian life to the original apostles, across space connecting us with the faithful in every corner of the world.

Finally, the quiet and solitude of the experience, while awkward, has highlighted how much conscious attention (and less conscious anxiety) is often required - less than prayerfully - when celebrating Mass with a congregation, especially on bigger occasions at which one frequently finds oneself functioning not only as celebrant but also as de facto master of ceremonies and sacristan. Obviously I am still "sacristan" when I celebrate alone, but that experience is also obviously very different and far less pressured.

While I look forward eagerly to returning to "normal" - whenever that will be and whatever it will look like - this semi-solitary interlude has afforded a rare opportunity to focus in a unique way on what I am actually doing during the liturgy, which one may hope will that much better equip me to serve the Church in an uncertain future.