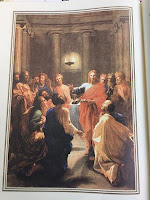 “We’ll meet again, don’t know where, don’t know when, but I know we’ll meet again.” That’s the opening line of the famous World War II song that Queen Elizabeth II was referencing in her televised Speech to the Commonwealth last Sunday, when she said, “We will be with our friends again. We will be with our families again. We will meet again.”
The challenge of separation we face today is obviously different from that of the World War II generation, but it is similarly frightening, simultaneously worldwide and very personal – as is our desire to meet and be together, as is our desire tonight to meet and be together for this Mass of the Lord’s Supper.
I received from the Lord what I also handed on to you. So begins tonight’s famous reading from Saint Paul’s 1st letter to the Christians in Corinth. Paul’s was the earliest written account of Jesus’ Last Supper with his disciples, a farewell meal that took the place of the Passover feast which Jesus would not live to celebrate and in the process replaced it with something completely new.

The New Testament tells us how, from the beginning, Christian communities devoted themselves to the breaking of bread and prayers [Acts 2:42]. As the Church grew in size and expanded in influence, the Church’s worship, centered on the regular celebration of the Lord’s Supper, would in time transform, first, the Roman Empire and, then, the ever wider world – as it still must continue to transform each one of us and the wider world we are all a part of.

The current crisis which we are experiencing has reminded us in the most painful possible way how we are all part of that one world. No oceans, no borders, no walls will protect us from the common sufferings of our world, nor excuse us from our common responsibilities to one another and to our one world. Nor must we let our temporary physical distance from one another and from this altar separate us from what we owe to one another and the new community the Lord’s Supper is intended to create among us.

The short passage we just heard, from Saint Paul was originally part of a longer passage that for most of the Church’s history was read at this Mass. Saint Paul wrote that earliest written account of what happened at that most memorable meal in all of human history not just to tell us a nice story about something that happened a long time ago. It was its present effect that Paul cared most about, and so Paul was in fact complaining, criticizing the Corinthians, telling them that they were missing the main point of the Lord’s Supper – receiving the Lord’s Body and Blood in an unworthy way, doing so to their peril. I hear that when you meet as a church there are divisions among you, Paul wrote.
What an indictment! Then as now, all was not well in the Church. The social, economic, and class distinctions, the inequalities, conflicts, dissensions, and factions, endemic in secular society were making themselves felt within the Corinthian Church community, so much so that even the celebration of the Lord’s Supper still seemed to mirror those same social, economic, and class distinctions, inequalities, conflicts, dissensions, and factions.
Perhaps the Corinthians couldn’t quite help bringing the worst of the world with them - any more than we can. That is why what happens at this altar is so important, intended as it is to enable us to go beyond our individual self-enclosed limits and so bring something new to the world. For Jesus’ command to his disciples to do as he did is an invitation to a whole new way of life, made possible for us by what Jesus himself has already done on our behalf.
Back at the Last Supper, in the scene that follows next in John’s Gospel, Satan is said to have entered Judas, who, then, after taking a morsel of food from Jesus, left the Supper. How many times has Pope Francis warned us about the danger posed by Satan! The Devil, Pope Francis has warned, “poisons us with the venom of hatred, desolation, envy, and vice” [Gaudete et Exsultate].