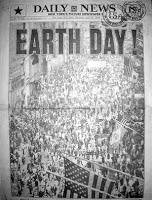 Earth Day has long since lost whatever novelty or glamor it had when it was first observed back in 1970 (photo), an event I remember being part of in New York's Central Park. Even as the coronavirus monopolizes our limited attention spans and physically keeps us apart, the world continues to cry out for collective action as the calamitous consequences of our alienation from nature and our failure to face up to the challenge of climate change become more incontrovertibly evident (while our current government's response to these crises stands out for its increasing ignorance and stupidity). Earth Day for me as a college student in 1970 was fun, but the occasion seems so much more somber now.

Of course, the situation was very different then. In the 1960s climate change was hardly on anyone's agenda, but environmental degradation was visible to all. The environmental movement which developed in response to that readily recognizable crisis gave us not only Earth Day but a veritable treasury of bipartisan environmental legislation in the 1970s. Then came the disastrous election of 1980 and 40 years of too many Americans drinking too much anti-government kool-aid, with the results that we are living with now - a government not only unwilling but alarmingly incompetent to address either the immediate threat of a global pandemic or the long-term threat of climate change.

For me Earth Day has also become a a suitable annual opportunity to recall - and mourn the loss of - the Church's traditional Rogation Days, traditionally observed on April 25 (the "Greater Litanies") and on the three days before the Ascension (the "Lesser Litanies"). Like so many treasured traditions the "Greater Litanies" had pre-Christian roots - in this case in the ancient Roman Robigalia festival, one of ancient Rome's significant spring agricultural commemorations. That ancient Roman festival was focused on protecting the spring and summer crops and included several chariot races. With triumph of Christianity these races were transformed into the Rogation Procession - the "Greater Litanies," as they were known until 1969..


Ancient peoples appreciated (so much better than we) their collective dependence on the natural world and on one another. The change in religion from paganism to Christianity redirected the focus of people's prayers, but that didn't change their appreciation of their dependence on nature, or their social interdependence, or the immense value of ritualizing this on traditional days.

Today's environmental woes (famines, droughts, floods, storms, fires, and pandemics) and the many social and political crises and conflicts which stem from them wholly or in part seriously threaten both our physical world and the human architecture of civilization that has made our planet special. Having been so frivolously discarded half a century ago, the Rogation Days are undoubtedly gone for good, but the case for recovering and retrieving their spirit seems, if anything, even more obvious than ever!