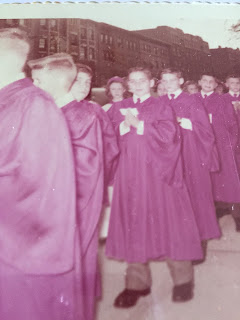 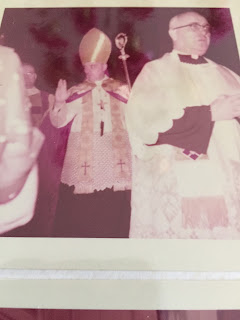 I love finding these old photos from a seemingly simpler era. These two portray my Confirmation, 63 years ago today, September 22, 1957.

In the first photo, we are all in two lines (as we so often were in those days), wearing our confirmation gowns (red for boys, white for girls) and holding our all-important name cards. I guess I was looking directly at some family member holding a camera - all the while very attentively guarding my name card. Whatever its theological and spiritual significance, I experienced confirmation primarily as just another rite of passage. Indeed, some years later at my 8th grade Baccalaureate Mass, the priest referred to confirmation as "something that just happened to you when you reached a certain age" (in contrast to our graduation which, he suggested, represented more of an actual accomplishment.)

What was particularly important to me about confirmation was that I got to choose a name. I chose Michael for my confirmation name, because I was attracted by the bellicose militaristic image of Michael the Archangel in the prayer which we then regularly recited as part of the so-called “Leonine Prayers for Russia” recited after Low Mass. Because that was what I cared the most about, that is the part of the ceremony I best remember.

When my turn came to kneel before the Bishop on his faldstool in front of the High Altar, a priest took the card out of my hand and announced my confirmation name to the Bishop (in what I would later learn was the nominative case). The Bishop then addressed me (in what I would later learn was the vocative case): Michaele, Signo te signo crucis; et confirmo te chrismate salutis. In nomine Patris, et Filii, et Spiritus Sancti. ("Michael, I sign you with the sign of the cross and I confirm you with the chrism of salvation, in the name of the Father and of the Son and of the Holy Spirit.")

The second photo shows the Bishop who pronounced those momentous words. He was a Dutch Augustinian, Peter Canisius van Lierde (1907-1995), who at that time held the office of "papal sacristan," a post he occupied for 40 years from 1951 through 1991. (A year later, as papal sacristan, he would be the one to administer the sacrament of Extreme Unction - better known now as “Anointing of the Sick” - to Pope Pius XII, a service he would repeat again in 1963 for Pope Saint John XXIII.) Ordained a priest in 1931, he earned doctorates in both theology and philosophy, and then headed the Augustinian College of Santa Monica in Rome, where he sheltered various refugees, military officers, Jews, and anti-fascist politicians during the war.

(There is actually a YouTube video about him in late life, Pietro Canisio Van Lierde, which ,despite its Italian title, is almost entirely in French:  https://www.youtube.com/watch?v=Oudl5CUpzKA )

In September 1957, Bishop Van Lierde was visiting my Bronx, NY, parish of Saint Nicholas of Tolentine to consecrate the finally finished upper church and then celebrate the parish’s Golden Jubilee Mass on September 9 and 10 respectively. (The parish was staffed by Augustinian friars and its patron saint was a 13th-century Augustinian friar and the first Augustinian to be canonized. Their province patron was Saint Thomas of Villanova, on whose feast day I was confirmed.)
At Mass earlier that day - unusually for that time, my Confirmation took place on a Sunday, so of course we all attended Mass earlier that morning - an older student said "Congratulations" to me. I remember I thanked her, although what about being confirmed quite warranted congratulations was not completely obvious either then or now, since it was, after all, "something that just happened to you when you reached a certain age." More accurately, of course, for most of history Confirmation was something that happened to you when a bishop happened to be available. But, in 1950s New York, there were plenty of bishops and so Confirmations occurred regularly and thus appeared to be determined more by one's age (or grade-level in school).

As I recall, Confirmation seemed less of a big deal than the energy invested in it would seem to suggest. But it was part of a way of life sanctified by the building in which it occurred. It was that great gothic-towered parish  church, that dominated the neighborhood both physically and socially, that took me out of time and beyond the narrow confines of my limited space, and that that taught me that to go to the altar of God would give joy to one’s youth. (Introibo ad altare Dei, ad Deum qui laetificat juventutem meam, as we were then happily taught to say.) That was something I never forgot – both in brief intervals of ephemeral, fleeting success and in times of devastating, frightening failure.