“The Odd Man Out Among the Virtues.” 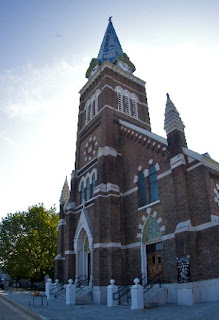 Wrath and anger are hateful things, yet the sinner hugs them tight.

The biblical author wrote that early in the 2nd century B.C., but his observations seem as pertinent today as then, his conclusions as true today as then. All of us, individually and collectively, surely have had our share of experience with wrath and anger, and have certainly seen their consequences. Being sinners, as we all are, we may also, in our own lives and in our own behavior, also have hugged wrath and anger all too tightly, to our own detriment and that of the world.

Wrath and anger certainly seem to be the primary descriptors of our public life as a nation, as we increasingly sort ourselves out into separate and mutually despising geographical and cultural communities, while the world’s seemingly intractable social and political problems and conflicts continue to challenge us. The scriptures we just heard do not directly address those challenges. They do, however, say something important about who God is, what kind of relationship God has chosen to have with us, and what kind of people we are being called by God to become through the personal and social choices we make.

The Gospel today focuses our attention squarely on forgiveness, which Alan Wolfe [Moral Freedom: The Search for Virtue in a World of Choice, Norton, 2002] famously referred to as “the odd man out among the virtues.” The forgiveness of which Jesus speaks so insistently is not another word for being nice, for going along so we can all get along. Nor is it what our therapeutically oriented society would have us focus on – letting go of hurts and resentments, for our own good, to get on with life. That may be good advice. It may make life less stressful, which, to be sure, is all to the good. But the forgiveness of which Jesus speaks is something significantly more than that.

Peter’s question – Lord, if my brothers sins against me how often must I forgive? – is a very humanly framed question. It is not about forgiveness, as such, but about me. What is the minimum I must do to qualify as a good person? Jesus answers with a parable about God – about what God is like, how God acts, and what God’s actions mean for us, and what conclusions we need to draw from that for our own actions.

The debtor in the parable stands for each of us. His absurd attempt to make a deal and his ridiculous promise to pay his debt in full are absurd and ridiculous because they are so obviously impossible to fulfill and only show how hopeless the situation actually is. God obviously understands this. So he forgives the loan.

Sadly, however, the debtor servant seems to believe he somehow struck a deal, which is what humans do whenever they think they have somehow placated God on their own. This is not unlike the familiar arrogance of those who loudly shout about how they have earned their advantages all on their own, who think that they have pulled themselves up the ladder of life, whereas in reality they have grasped the hands of others and walked the path others have paved for them.

The parable tells us that God does not make deals. Indeed he disdains deals and deplores deal-makers. Since God does not want our sins to be a source of hostility between us, he reconciles us on his own. He forgives our sins, cancels our hopelessly unpayable debt, without any deals or deal-making. Forgiveness is free. And, moreover, it is freeing. It makes us free – free from a slave’s fearful machinations for an altogether new kind of relationship with one another. So now we too can forgive – and indeed have to forgive, just as God forgives us.

Sadly, the servant who was forgiven the large debt thought that it was his own cleverness that had hoodwinked the king. So he failed to experience the freeing effects of forgiveness in his own life – something that showed right away in his treatment of his fellow servant.

Being angry, remaining resentful, holding grudges, seeking revenge – all that is the most natural thing in the world. It is our alternative experience of something different – the new life we have received through God’s forgiveness – that makes it possible for us, as people who are conscious of having been first forgiven ourselves, to become agents of God’s reconciliation in our world.

And so, assembled here today (and every Sunday), we may be burdened by the weight of our debt and the fragility of the social bonds on which we depend for our survival in a hate-filled world. But, gathered together as one, as members of the Body of Christ, we feel the forgiving power that frees us for something so new and so different.