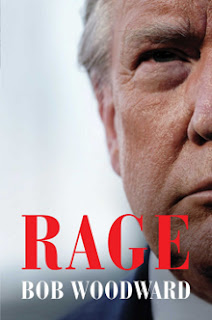 It's only been publicly available since Tuesday, but by then its contents were already familiar to us from countless pre-publication excerpts, interviews, and, of course, the now famous tapes. Those tapes in turn have given rise to some debate about what Woodward should or should not have done with them at the time, and whether it might have mattered in terms of people's responses to the pandemic. While not unimportant in itself, that debate  is also something of a distraction, both from the main argument of the book and from the important issues in this election. Bob Woodward is not running for President. Donald Trump is. His character and his handling of the presidency for the past four years are at issue in this election, not this book or the judgments of its author. While the author is not the candidate, his book is, however, a source of further information about the character of the candidate.

Trump books are proliferating, but Bob Woodward remains the establishment star when it comes to presidential journalism, a journalism that goes all the way back to the Watergate story which made him famous in the first place. Trump also cooperated personally with Woodward, with 17 interviews, both in the Oval office and over the telephone, the first of them just as the House was about to impeach the President and about three months before the pandemic took over the world. (He had not cooperated with Woodward on his 2018 book Fear: Trump in the White House.)

The book's title too comes from the President himself - from a conversation which Woodward and Robert Costa had with Trump in March 2016. When Woodward referred "a lot of angst and rage and distress" in the Republican party, Trump said "I bring rage out. I do bring rage out. I always have.". Few truer words have been uttered in the course of this presidency!

Since the book is already so familiar, there is no need to to repeat what we have all already heard. Much of the book is, in fact, a recapitulation of familiar history, especially as seen by and through the establishment figures who initially agreed to serve in the Trump Administration - the "guard rails" as the media have often referred to them, "guard rails" that were in the end ineffectual and are now largely gone in any case.  The story of General James Mattis is illustrative. Maybe Mattis was right to take the job of Secretary of Defense when Trump offered it to him. Or maybe not. Woodward recounts how, having been offered the post of Defense Secretary, he called his 94-year old mother, a World War II Army Intelligence veteran, who, he knew, hated Trump. “How can you work for that man?” she asked him. Maybe his mother was right! In the end, as we all know, Mattis finally felt he had to quit. Woodward quotes Mattis: “When I was basically directed to do something that I thought went beyond stupid to felony stupid, strategically jeopardizing our place in the world and everything else, that’s when I quit.”

But, at this late stage in the story, we hardly need another book - even one by Bob Woodward - to tell us all this. Or to remind us of the failures of Trump's management style, what former Chief-of-Staff General Kelly called "Crazytown." Or of the President's barbarous assault on the international institutions and structures built up largely by the U.S. in the post-World War II era. Again, we already know all this.

What we did not know, at least not in detail, was how Trump truly reacted to the pandemic, and it is Woodward's singular contribution to have recorded in his interviews the President's real-time reaction to the crisis from its start. After detailing how Dr. Fauci and Dr. Redfield responded to the first revelations from China, Woodward introduces us to the President's own responses in his 8th interview (March 19, 2020). At this point it was clear to Woodward that Trump understood the severity of the situation.

“Part of it is the mystery,” Trump said. “Part of it’s the viciousness. You know when it attacks, it attacks the lungs. And I don’t know—when people get hit, when they get hit, and now it’s turning out it’s not just old people, Bob. Just today and yesterday, some startling facts came out. It’s not just old, older. Young people too, plenty of young people.”

So it seems that all those people who endanger themselves and others by their refusal, for example, to wear masks out of fealty to their Dear Leader are expressing their fidelity to a presidential posture that contradicts what the President privately knew to be the case.

On February 7, Trump told Woodward about "the 'dynamite behind every door,' the unexpected explosion that could change everything." Woodward's account reinforces his conclusion "that the 'dynamite behind the door' was in plain sight. It was Trump himself. The oversized personality. The failure to organize. The lack of discipline. The lack of trust in others he had picked, in experts. The undermining or the attempted undermining of so many American institutions. The failure to be a calming, healing voice. The unwillingness to acknowledge error. The failure to do his homework. To extend the olive branch. To listen carefully to others. To craft a plan."

Based on the picture his account portrays, Woodward unsurprisingly concludes: "Trump is the wrong man for the job."