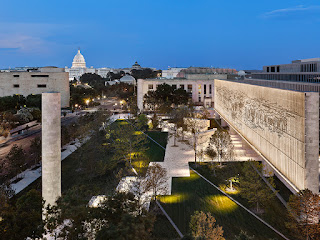 Tomorrow's Dedication of Washington DC's new memorial to President Dwight D. Eisenhower (photo above from the official Eisenhower Memorial web page) had originally been planned for May 8, the 75th Anniversary of VE Day, an altogether fitting occasion to remember and celebrate the man who led the Allied invasion of Normandy and as Supreme Commander of the Allied Forces in Western Europe successfully completed his mission with Germany's unconditional surrender. But then Covid-19 intervened and forced the event's postponement until now

As usual on such occasions, there has been the customary controversy about the design and appearance of the memorial, in this case particularly about the statue of Eisenhower as a boy.  As with all such monuments, there is also always the intriguing question what the person being honored might have thought of it. None of that is unimportant, but it is all less important than the fact that finally the 34th president is at long last receiving the honor that is surely his due.

My father, a member of the 'greatest generation," who happened to share a birthday (October 14) with General Eisenhower, served in the European theater in World War II. Then I in turn grew up in the glorious years of the Eisenhower presidency. It is hard to overstate what a difference the 1950s were from the decades of Depression and War which had preceded, how even people of very modest means, like my parents, experienced those years as a time of new opportunities and possibilities. Thus, when Senator John F. Kennedy was contemplating seeking the Democratic vice-presidential nomination in 1956, his father wrote to Sargent Shriver: "you are going into an atmosphere where over 65 million persons are working and getting better pay than ever before….So you have an economic condition that is excellent; you can’t offer anything to anybody from laborer to capitalist that can persuade him that he can do better." [Quoted in Fredrik Logevall. JFK: Coming of Age in the American Century NY: Random House, 2020, p. 627.]

Of course, I had been spared both the Depression and the War and so took the amazing socio-economic progress of the 1950s for granted. To the extent that I paid attention to politics, my opinions were conventional. The topics I was most aware of and most interested in were foreign affairs, i.e., the Cold War, especially its periodic crises - Hungary and Suez in 1956, Lebanon in 1958, Kruschev's visit to the U.S. in 1959, and the U-2/Parish Summit Crisis in 1960 - and the space race, precipitated by Sputnik in 1957.

Through all of that, Eisenhower was a constant - a dignified, reassuring, encouraging presidential presence - comparable perhaps to Kaiser Franz Josef's symbolic resonance in pre-World War I Austria. Everything about the presidency seemed - and was - more dignified then. When there was a crisis in Hungary or Suez or wherever, the President addressed us on TV from the Oval Office, and the National Anthem was played at the end of his speech.

In the decades since Eisenhower, presidential scholars, notably my Princeton mentor Fred I. Greenstein, have retrieved his reputation and revealed his political skill, practical wisdom, and good sense, qualities that coexisted with the modesty and humility that made him successful both as a military and political leader and as a person empowered to represent and symbolize a nation. Eisenhower also set the Republican party on a course which it would have done better to remain on, instead of the misguided detours it has taken since the disastrous election of 1980. Thus, he famously said in 1954:

“Should any political party attempt to abolish social security, unemployment insurance and eliminate labor laws and farm programs, you would not hear of that party again in our political history. There is a tiny splinter group, of course, that believes that you can do these things. Among them are a few Texas oil millionaires, and an occasional politician or businessman from other areas. Their number is negligible and they are stupid.”

Stupid they may still be, but negligible they unfortunately no longer are!