60 years Ago in Houston 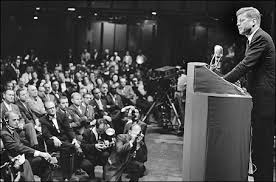 It happened to be John F. Kennedy's 7th wedding anniversary, but it was also maybe the most important night (other perhaps than the First TV Debate) of the entire campaign. According to the classic chronicle, Theodore H. White's, The Making of the President 1960: "Originally the Kennedy strategy had been to wait, to hope that the [Catholicism] question could be addressed some time late in October, close to the election, when it could be most effectively dealt with. But decisions in a campaign are forced on one by timing of emotions over which no one has control. The prestige of the Reverend Norman Vincent Peale had now, in early September, given respectable leadership to ancient fear and prejudice." (Peale was actually something of a surrogate for Billy Graham, who kept a relatively low profile, but was active behind the scenes, stirring Protestants to action against the threat a Catholic president presumably posed to the values of real - i.e., Protestant - America.) So Kennedy accepted an invitation from the Greater Houston Ministerial Association to discuss his religion in Houston, TX, on September 12.  “We can win or lose the election right there in Houston on Monday night,” campaign staffer Ted Sorensen said to a friend as that momentous Monday approached. Indeed, renowned religion writer Kenneth Woodward is of the opinion that "without that powerful and historic speech, it is unlikely that he would have won the election."

The agreed format was for Kennedy to make an opening statement, then submit himself to whatever questions the assembled Protestants chose to ask. Thus, for example, when asked is he would accept direction from the Church in his public life,  he answered: “If my church attempted to influence me in a way which was improper or which affected adversely my responsibilities as a public servant, sworn to uphold the Constitution, then I would reply to them that this was an improper action on their part, that it was one to which I could not subscribe, that I was opposed to it, and that it would be an unfortunate breech—an interference with the American political system. I am confident there would be no such interference.”

The full text of Kennedy's famous opening statement is still worth reading, both for how it reflected the American religious situation at that time and for the clear contrast to that situation today - a situation very different from the one Kennedy confronted in 1960.

He began by listing some of what he considered "the real issues which should decide this campaign," thus attempting to relativize the importance of the religious issue and relegate it to the periphery of prejudice. He then stated his belief in an America "where no Catholic prelate would tell the President (should he be a Catholic) how to act and no Protestant minister would tell his parishioners for whom to vote ... and where religious liberty is so indivisible that an act against one church is treated as an act against all."

Sixty years later, we have long passed both those thresholds. The rise of the religious right - has led to lots of clergy lecturing candidates on how to act and congregations on how to vote. At the same time, "religious liberty" is increasingly invoked but in a significantly sectarian way that is far from "indivisible."

Of course, throughout American history - from the 19th-century Abolitionist movement to the 20th-century Civil Rights movement - clergy and other religiously motivated citizens have acted to influence our public life, fully acknowledging their religious inspiration. When successful, they have usually been able to relate their religious motivations to wider public concerns. That was true even of Prohibition - an example of a predominantly Protestant, religiously inspired, sectarian movement, which successfully connected with more broadly shared serious concerns about the social effects of alcohol abuse, and then failed when that consensus collapsed and other concerns acquired greater prominence. Prohibition then came to be experienced by many as culturally dis-unifying and socially burdensome, more like an anti-pluralist "Protestant Ascendancy" than something suited to American pluralist politics.

Obviously in the context of 1960, it was imperative for Kennedy to minimize such possibilities. And, while he surely could imagine the sorts of situations which he was assuring his Protestant audience would simply never happen in America, he could hardly have anticipated the ways in which American religion itself has changed, and has come to aspire to unprecedented political power, of the sort that Kennedy in his time might have associated more with the Catholic Integralism of Franco's Spain or de Valera's Ireland..

Yet a mere 20 years later, in 1980, the lobbying group Christian Voice issued its first "Biblical Scorecard" rating congressmen on their votes on selected issues. That same year, devout, Sunday-school teacher Jimmy Carter was called "anti-Christ" by evangelical Christians eager to elect a divorced-and-remarried, non-churchgoer as president in his place. Pollster Lou Harris estimated that the 61% of white Protestants who voted for Reagan were 2/3 of his margin of victory.

This religionization (if such a word exists) of American politics - the use of politics by religious groups to acquire political power over others - has significantly altered American politics, almost certainly for the worse. But it has also seriously damaged religion.

Thus Ronald F. Inglehart in "Giving Up on God: the Global Decline of Religion," Foreign Affairs (September.October 2020) has argued that, in addition to "rising levels of economic and technological development," politics also accounts for some of religion's decline in the U.S. Specifically he cites the contemporary Republican Party's adoption of controversial Christian positions on certain cultural issues in order to appeal to some religious voters, and suggests this has had the effect of pushing others, "especially those who are young and culturally liberal, away from religion." In particular, he claims that prominent religious leaders' "uncritical embrace of President Donald Trump" has led other religious figures "to fear that young people will desert their churches in droves, accelerating an ongoing trend." Indeed, Ingelhart argues, where "it once was generally assumed that religious beliefs shaped political views," now the opposite may increasingly be the case. Indeed, that latter phenomenon may be the most problematic legacy of the so-called "religious right," namely the increasing subordination of religion to politics and the pursuit of political power.

Likewise, Bill McCormick in America (“Whether Trump or Biden wins, the church will keep losing. Where does that leave Christian voters?”) has just recently asked the question from inside the tent, so to speak.

"But as the country continues to secularize, Christians have to ask themselves: Has Christian engagement in politics been good for evangelization? If not, what kinds of political engagement are good for evangelization? What kinds draw people to Christ?" He worries that, for many, ”Christians’ political activity is the public face of Christianity. As the number of Americans attending religious services, identifying with religious bodies or even having religious friends continues to decline, the number of Americans who will know Christianity through its public engagement will increase. They will have to judge Christianity and Christ himself through those fruits."