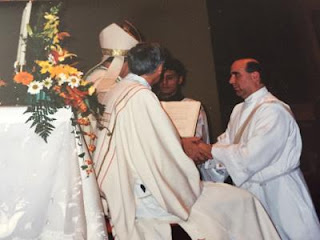 By the end of the day today, I will have been ordained a priest for 25 years!

Were it not for the pandemic, my 25th anniversary would have been celebrated very simply with a private Mass in the Motherhouse chapel with perhaps a handful of local New York friends in attendance. But, because of the pandemic, my term as pastor was unexpectedly extended. So I have an unanticipated opportunity to mark my anniversary with the parish community I have served these past 10 years. On the other hand, in a year when even the Al Smith Dinner went “virtual" and when there has been so much disruption and suffering, a simple celebration seems appropriate.

That said, as I mark this occasion, I do want to use it  to thank God and the Church for these 25 fulfilling years. And, in a particular way, I want to thank the people of the three parishes where I have served for accompanying me on this wonderful 25-year journey. My anniversary Mas tomorrow will be offered in particular for all the people - living and deceased - of Saint Peter's parish, Toronto, Saint Paul the Apostle parish, NY, and Immaculate Conception parish, Knoxville. I thank all who helped and supported me along the circuitous route that took me to that day 25 years ago, and all those who have sustained and encouraged me since that day. It has been my greatest privilege and my greatest joy to have been a parish priest, and I will surely miss it.

Meanwhile, I have indulged my curiosity about what other memorable events have coincidentally occurred on this date.
Probably the most memorable and most important historical event that occurred on this date was the Battle of the Milvian Bridge in 312, which made Constantine Roman Emperor. Shortly after, Constantine issued the Edict of Milan legalizing Christianity in the Roman Empire.
Also on this date in 1886 the Statue of Liberty was dedicated.
On this date in 1919, Congress passed the Volstead Act.
On this date in 1922, Italy's King Victor Emmanuel III appointed Benito Mussolini his Prime Minister.
In 1929, this was Wall Street's "Black Monday."
On this date in 1958, Pope Saint John XXIII was elected to succeed Pope Pius XII.
And, on this date in 1965, the Second Vatican Council promulgated its Decree on Religious Life, Perfectae Caritatis..
And I am old enough to remember at least those last two events very well!
Finally, in the liturgical calendar, today is celebrated as the feast of the holy Apostles Saints Simon and Jude, the latter universally invoked as the patron of desperate causes and hopeless cases, a particularly providential coincidence!
Tomorrow, I will solemnly celebrate my 25th anniversary at a Mass live streamed on Facebook for the benefit both of friends and family around the country and of parishioners and friends here who, because of the pandemic, prefer not to attend in person. I will post my anniversary homily and the link to the video of the occasion later this week.
Posted by City Father