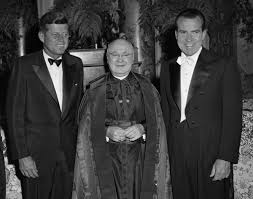 In a "normal" year, this third Thursday in October would have been the occasion for the annual Alfred E. Smith Memorial Foundation Dinner (commonly called "the Al Smith Dinner"), a grand, white-tie extravaganza at New York's Waldorf-Astoria Hotel to raise money for New York's Catholic Charities. It is an event which every four years gets a lot of extra attention thanks to the presence of the presidential candidates. But not this year! The pestilential plague that has upended both our private and our public lives led to an alternative "virtual" event held two weeks earlier, which was then almost universally overlooked because of President Trump's covid-19 diagnosis a few hours later.

As presumably everyone who knows any American political history knows, Al Smith was the New York Governor who ran for president - and lost - in 1928, the first Roman Catholic to be nominated for president by a major political party. (John F. Kennedy was the second in 1960. John Kerry was the third in 2004. Joe Biden is the fourth; and, if elected, will be only our second Catholic president.) Cardinal Francis Spellman started the dinner in 1945, a year after Al Smith's death. Over the years it has hosted many famous speakers, but it is its semi-traditional role as the setting for a joint appearance of the two presidential candidates that has cemented its image in American political history and lore.- Kennedy and Nixon in 1960, Carter and Ford in 1976, Carter and Reagan in 1980, Bush and Dukakis in 1988, the second Bush and Gore in 2000, Obama and McCain in 2008, Obama and Romney in 2012, and Trump and Clinton in 2016. That last presidential-year dinner attracted 10.3 million viewers (and raised $6 million for Catholic Charities).

Traditionally, candidates are expected to be humorous and convivial. In 2016, Trump deviated somewhat from that model, making more unfriendly comments about his rival than would normally have been expected. This year, the pandemic precluded not only a live event but the comedy-act aspect. Both candidates gave more serious speeches. Thus, carefully avoiding all references to his many disagreements with Pope Francis, Trump made a pitch for the votes of conservative Catholics. Biden, in contrast, highlighted his personal Catholic credentials, recalling his first meeting with Pope Francis in Rome in 2013 and then how in Washington in 2015 Pope Francis met with his entire family to console them after his son's death. He highlighted his own journey, in language his co-religionists (especially those of his generation) could comfortably relate to, expressing how his faith had helped him "through the darkness" to live "a life in public service" which was worthy of those he had lost.

In the absence of the usual comedy routines, it was left to Cardinal Dolan to inject some light-heartedness. At the end, Dolan reminded everyone of the Catholic political hero the event is named for and recalled that Al Smith was "a happy warrior," but "never a sore loser."