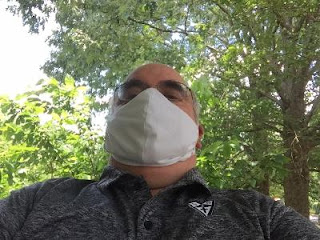 A "patriotic duty" is what former Vice President Joe Biden called wearing a face mask during last night's "Town Hall."  Some things - like the moral imperative to wear a mask - ought to be so obvious that they should not have to be said at all. It is a sign of our extremely distressed state as a national community that, instead of being obvious, the duty to wear a mask has become one more thing for us to argue about.

Recently, Dr. Robert Redfield, the Director of the Centers for Disease Control and Prevention, told a Senate panel that face masks might prove to be our best protection against the virus, maybe even better than an elusive vaccine which we do not yet have. If everyone wore a mask for the next two to three months, he said, “We’d bring this pandemic under control.”

Imagine such a simple response to our present predicament! All we need to do is take this disease seriously and use the means at our disposal to limit the spread of infection. Nothing more heroic than that is being asked of us.

Yet every day I encounter people in public without masks. What do they think they are doing? What motivates such behavior?

Already more than 200,000 Americans have died of Covid-19. Undoubtedly, given the newness and the ferocity of this virus some of those losses might have been unavoidable. But we can see from the experience of other societies which have handled this better that we have lost many more than we might have had we taken this disease seriously from the beginning as if all of us together as a society had done the sorts of things we needed to do -  like wearing face masks in public.
The Institute of Health Metrics and Evaluation has predicted that as many as 363,000 Americans may die of Covid-19 by the end of this year. As others have observed, that would be more Americans dying in less than one year from the virus than the entire number of combat deaths in four years in World War II. But that same institute’s model also suggests that, if 95% of Americans wore masks then as many as 100,000 lives might be saved between now and the end of the year.
Bad behavior, socially irresponsible behavior - like not wearing a mask whenever in public - is not inevitable. it is a choice, a bad choice, an immoral choice. It reflects the evil ideology of individualism and its false notion of freedom. But individualism, as Pope Francis has once again reminded us in his latest encyclical "does not make us more free." Nor does it make us "more equal, more fraternal" (Fratelli Tutti, 105). On the contrary, if we are to have any hope of arresting our social disintegration, we must together again become conscious of our responsibility to and for one another, without which there is no such thing as society, only suffering - that moral state of war which Thomas Hobbes long ago wrote about in which human life really is "solitary, poor, nasty, brutish, and short." For too man of our fellow citizens, sadly, such is their life right now.
In this crisis, regarding masks and so much else, one's "patriotic duty" is increasingly obvious.
Posted by City Father