The Perennial Platonic Temptation and its Political Perils 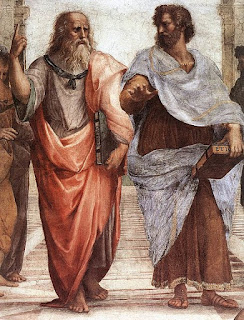 Back in the day, when I was teaching political science, the fall semester saw the annual rerun of my favorite undergraduate course, Ancient Political Theory.  That course could encompass a variety of authors and political and philosophical questions. But it always and inevitably centered on Plato and Aristotle and invariably had to address the fundamental political philosophical dilemma the two founding giants of philosophy seemed to differ on.

As my Princeton mentor, Sheldon Wolin, wrote some 60 years ago: "the central weakness in Plato's philosophy lay in the failure to establish a satisfactory relationship between the idea of the political and the idea of politics. the problem is not how the one can eliminate the other, but rather how can we gain the necessary knowledge of politics to enable us to act wisely in a context of conflict, ambiguity, and change?" Hence he (like Aristotle) took issue with Plato's approach: "the body politic does not experience 'disease,' but conflict; it is beset not by harmful bacteria but individuals with hopes, and ambitions, and fears that are often at odds with the plans of other individuals; its end is not 'health,' but the endless search for a foundation that will support the mass of contradictions present in society." So "political art," he argued, "would be one framed to deal with conflict and antagonism; to take these as the raw materials for the creative task of constructing areas of agreement, or, if this fails, to make it possible for competing forces to compromise in order to avoid harsher remedies." (Politics and Vision: continuity and change in Western Political thought, 1960, p.43.)

Accordingly, in the early 16th century, Rapahel's famous fresco, The School of Athens (photo), portrayed Plato holding his Timaeus and pointing upward beyond this changing world that we experience, which he believed to be just an image of eternal and unchanging philosophical reality, while Aristotle, holding his Ethics, points to the world of sense and human experience within which political institutions must be developed and practical political judgments made.

It is a perennial temptation of philosophy and religion to aspire to resolve political problems by transcending politics. Paradoxically, a similar impulse can be discerned in forms of modern political thought that try to escape from the challenges of political deliberation and debate through the supposedly impersonal and objective workings of the economic market. The philosophical and religious impulse is motivated by an aspiration for what is good and true, a state of moral "health," unencumbered by conflicting hopes and aspirations, while the modern economic impulse is governed by economic class and greed But both may misdirect political life in ways which inevitably frustrate the particular purpose of politics, namely to enable different interests and aspirations to be fulfilled or, at least, accommodated, within the context of an inclusive community. Needless to say, the political deliberation and debate that such politics presupposes ought to be more than simply talking past one another.

Thus, in his latest encyclical Fratelli Tutti: On Fraternity and Social Friendship, Pope Francis invites "authentic social dialogue," which "involves the ability to respect the other's point of view and to admit that it may include legitimate convictions and concerns" (202).

Like Platonism, integralism - the theory that religious doctrine and morality should be the basis of law and public policy in a state - has admittedly attractive aspects. There certainly were at the time very good historical reasons, for example, to want to support Franco's Spain and DeValera's Ireland (the two most approximate applications of integralism in the 20th century). History, however, has rendered a somewhat different verdict on those efforts, which in the end may have rebounded more to the Church's detriment than to its advantage. (As G.K, Chesterton famously warned,  'When a man believes that any stick will do, he at once picks up a boomerang.")

Symbolic affirmations of and certain institutional supports for a nation's historic religious identity are altogether appropriate in societies where they make historical and cultural sense (for example, the special legal status of the Church of England, analogous arrangements in certain Scandinavian countries, and the institutional support of religious schools in some Canadian provinces). But a wholesale effort to re-align a society's legal system with religious teaching - against the will of many, maybe even most, of its citizens - poses monumental problems, not least for fundamentally failing to distinguish between the ultimate ends of the Church and the vital but different and limited ends of the State.

Voting in contemporary pluralistic societies is a political act, and hence an exercise of the virtue of prudence. It involves the conscientious application of moral principles to actual circumstances with all their inherent complexities and in a context of disagreement within the community. (If political judgments were morally self-evident and everyone agreed on what was good and true, then there would be no need for politics in the proper sense.)

Religion teaches us that lying, for example, is intrinsically evil. The Catechism calls offenses against the truth "fundamental infidelities to God," and labels lying "the most direct offense against the truth," something which is to be condemned :by its very nature. (CCC, 2464, 2483, 2485). Yet, as other have noted, only a very small and specific subset of lies, those defined as perjury, are treated as illegal and punishable by law - and not because those particular lies are more intrinsically evil but because of their particular effect on the common good.

When Jesus said repay to Caesar what belongs to Caesar and to God what belongs to God (Matthew 22:21), which we coincidentally heard again at Mass just yesterday, he wasn't just being witty, coining a clever phrase to escape the trap his opponents had laid for him. He was expressing something significant and true about the complementary but distinct ends and purposes of God's kingdom and earthly politics.