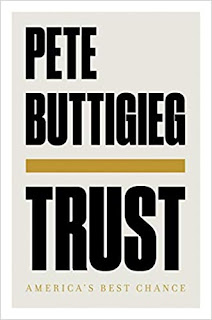 Former South Bend Mayor and presidential candidate Pete Buttigieg, whose 2019 memoir, Shortest Way Home, sold more than 100,000 copies, has written a second book, Trust: America's Best Chance. Since he is not presently a presidential candidate, one wonders whether his second book may sell as well. Certainly the subject warrants attention as the country continues to careen dangerously down the path of increased division into mutual incomprehending tribes, defined primarily by their distrust and hatred of the other. “Presidents after the Trump era will need to return to the basics when it comes to trust and credibility," he notes, perhaps suggesting a job description for a post he might yet someday hope to fill.

Buttigieg effectively brings his own autobiography into the discussion by highlighting how important trust was for him and those he served with in Afghanistan. Given the salience of personal stories in American culture, these may be the most memorable sections of the book.

Buttigieg begins with the obvious "So far," he says, "this young century of ours has a lot of explaining to do." He intends his book not s "a sweeping account of how we got here, or a full assessment of what it is to be alive and American in 2020," but instead "is written in the spirt of what must come next."

A personal historical note: One could certainly have expressed similar sentiments in 1920 in the aftermath of the "Great War" and the Influenza Pandemic. It took a while, but in time - and with good leadership - this country came back quite successfully. The question for today ought to be do we still have it in us to do that again, and can we elect leaders to bring that out in us?

Buttigieg, I believe gets that. Hence his argument about the centrality of trust. Our ability to meet this moment, he argues, depends 'on our ability to cooperate to achieve anything at all. And that will largely depend on our levels of trust." With his Afghanistan battlefield experience in mind, he contends "the cost of too little trust is even higher than the cost of too much."

Unsurprisingly, writing in 2020, he recognizes racism as "America's most pernicious form of distrust ... responsible for more death, more destruction, and more despair than any other force in American life." As importantly, he recognizes and highlights the consequences of the disastrous election of 1980, which resulted in "a new level of effort, even presidential effort, to sow doubt across America in some of our most important institutions."

One ultra-important American institution is, of course, the constitution, whose flaws and democratic deficits are very much on display today. Buttigieg reminds his readers that the constitution was designed to be amended. "This feature of the Constitution was itself an expression of trust: trust in future generations." Our founders "built into the system a way for it to become bigger than their own biases." But in recent decades we seem to have lost our appetite for amending the constitution. "We seem to have lost a level of ambition or imagination that was much more common in virtually every stage of American history but our own." Buttigieg goes on to address other particular policy proposals from voting to taxes, but I think his reminding us that the constitution is meant to be amended and that it has been amended almost continuously in American history until until about 50 years ago may represent his most important policy proposal.

In 2020, "we have reached a stage in which America has little to gain from denying that we, too, are a war-torn country with commensurately deep wounds still open." Indeed, we are. It will take a lot to repair our divisions and heal our wounds, and this book may be one small but helpful step in setting us on that path.