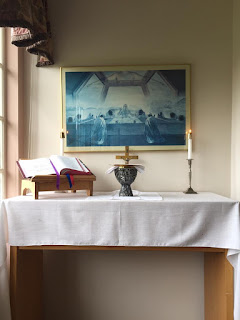 One of the perennial complaints (not by me, but by some) about the 2011 English translation of the prayers of the Missale Romanum has been that the language follows the Latin too literally. It certainly does follow the Latin more literally than the interim translations in use in the U.S. since 1970. Whether it is too literal is another matter - a debatable point I do not propose to address here. However, there is one obvious place - more than one in the sense that it is repeated regularly - where the English translation has gratuitously added a word. I refer to the conclusion to the collect, where the adjective "one" has been added to modify "God."

The traditional Latin conclusion, so familiar to altar boys of my generation, is Per Dominum nostrum Jesus Christum Filium tuum: Qui tecum vivit et regnat in unitate Spiritus Sancti Deus, per omnia saecula saeculorum. This is now translated as Through our Lord Jesus Christ, your Son, who lives and reigns with you in the unity of the Holy Spirit, one God, for ever and ever.

To a casual hearer, that gratuitous one might perhaps sound like a trinitarian affirmation. Or, more likely, since Deus is presumably in apposition to qui and hence refers to Christ, perhaps it represents a more classically Nicean affirmation of the Son's consubstantiality with the Father - Jesus Christ, your son, God, who lives and reigns. Either way, it has always seemed to me to do no harm

At some point early in my priesthood, however, I did realize that the natural cadence of my recitation tended to put the stress on the adjective one. Since I understood that one was not part of the literal Latin text, I consciously adapted my cadence so that the stress might fall more properly on the noun God. Other than that, I doubt I ever again gave the issue much thought.

Until, that is, I recently came across a discussion of this issue on the Pray Tell liturgical blog. For that discussion, go to: https://www.praytellblog.com/index.php/2020/10/17/possible-changes-to-collect-conclusions/

The originating cause of this discussion is apparently a May 13 letter from the Congregation for Divine Worship and the Discipline of the Sacraments stipulating a change omitting the word one in English translations. The letter is referenced in a notification from the British Archdiocese of Westminster, which is what the blog post cites. As quoted in the blog post:

It is clear from the Latin texts that the doxology emphasises the divinity of Our Lord, Jesus Christ, the Incarnate Son, who intercedes on our behalf, as the Second Person of the Blessed Trinity, to the Father and which prayer is made in the unity of the Holy Spirit. Thus the Son’s role of priestly mediation is made clear. To transfer the Trinitarian relational element in unitate as meaning unus Deus is incorrect.

Unsurprisingly, some of the comments convey the impression that some may think this may be an over-reaction. Perhaps so, perhaps not. Either way, if this change is eventually implemented in the U.S., I shall be more than happy to recite the prayer as prescribed by both the Latin and, now, the English texts!