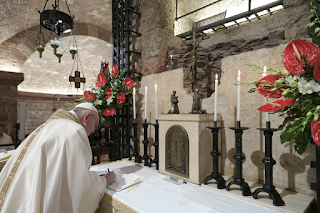 On Saturday, the vigil of the feast of Saint Francis, the Holy Father travelled to Assisi to celebrate Mass in the crypt where Saint Francis is buried and to sign there his latest encyclical letter Fratelli Tutti: On Fraternity and Social Friendship, which may be said to represent a kind of compendium of Pope Francis' social and political thought at this point in his pontificate and in this time of pandemic. It forms the third part of a programmatic trilogy consisting of his Apostollic Exhortation Evangelii Gaudium, his environmental encyclical Laudato Si', and now Fratelli Tutti.

The encyclical is long, as such documents tend to be. It is wordy and full of quotations of previous papal pronouncements, a perennial problem which makes it unlikely that ordinary Catholics - let alone others - will take the time to read it all. Which is a great shame, of course, for the Pope has here given us a profound and purposeful response to the catastrophe of contemporary society and politics.

Like his earlier environmental encyclical, Laudato Si', this document derives its title from words attributed to Saint Francis, whose spirit animates this encyclical as it animated its predecessor. Indeed, the document begins by recalling Saint Francis' famous visit to Sultan Malik-el-Kamil at the time of the Crusades, demonstrating "the breadth and grandeur of his love, which sought to embrace everyone." In that spirit, just as in Laudato Si' the Pope paid special mention to Orthodox Partiarch Bartholomew, here he acknowledges Grand Immam Ahmad Al-Tayyeb, whom he met in Abu Dhabi in 2019 when the two issued a statement "on Human Fraternity and World Peace and Living Together."

The Pope summarizes the purpose of this encyclical as his "hope that in the face of present-day attempts to eliminate or ignore others, we may prove capable of responding with a new vision of fraternity and social friendship that will not remain at the level of words." That contrast between fraternity and social friendship on the one hand and attempts to eliminate or ignore others on the other comes close to summing up the spirit and sense of the encyclical, the principle which animates the document's detailed discussions of particular political problems and economic and social situations characteristic of contemporary societies.

The encyclical was begun before the pandemic. In light of the added dimension provided by the world's poor response to the pandemic, the Pope asserts: "Anyone who thinks that the only lesson to be learned was the need to improve what we were already doing, or to refine existing systems and regulations, is denying reality." He expresses a similar sentiment about the financial crisis of 2008, the response to which "did not include rethinking the outdated criteria which continue to rule the world."

Parts of the encyclical sound almost like direct responses to the current crisis of U.S. politics and to the recent dominance of neo-liberal economics, as well as an attempt tp articulate a meaningful middle ground between the excesses of globalization and universalism, on the one hand, and localism and "populism," on the other. Thus, for example:

"Political life no longer has to do with healthy debates about long-term plans to improve people's lives and to advance the common good, but only with slick marketing techniques primarily aimed at discrediting others."

"we no longer have common horizons that unite us"

"Things that until a few years ago could not be said by anyone without risking the loss of universal respect can now be said with impunity, and in the crudest of terms, even by some political figures."

"We need to pay attention to the global so as to avoid narrowness and banality. Yet we also need to look to the local, which keeps our feet on the ground."

"There can be a false openness to the universal, born of the shallowness of those lacking insight into the genius of their native land or harboring unresolved resentment towards their own people."

"Lack of concern for the vulnerable can hide behind a populism that exploits them demagogically for its own purposes, or a liberalism that serves the economic interests of the powerful."

"The marketplace, by itself, cannot resolve every problem, however much we are asked to believe this dogma of neoliberal faith."

The Pope is particularly strong in his emphasis on the traditional Christian understanding of "the common destination of created goods," citing Saint John Chrysostom, Saint Gregory the Great, and Saint Paul VI, and also citing Laudato Si': "the Christian tradition has never recognized the right to private property as absolute or inviolable, and has stressed the social purpose of all forms of private property" and "if we make something our own, it is only to administer it for the good of all."

The Pope remains particularly committed to a culture of dialogue: "Authentic social dialogue involves the ability to respect the other's point of view and to admit that it may include legitimate convictions and concerns." How different the Pope's perspective from so many disputants in our contemporary culture wars, who unhesitatingly dismiss each other as malevolent and are completely incapable of recognizing the perspective which underlies the other's position on such sensitive issues! Francis notes: "A realistic and inclusive social covenant must also be a 'cultural covenant,' one that respects and acknowledges the different worldviews, cultures and lifestyles that coexist in society."

The Pope has some particularly insightful things to say about conflict about forgiveness. Unsurprisingly this leads into a more predictable discussion of war and the death penalty.  The latter issue has continued to be particularly salient in American politics. While recognizing legitimate public authority's right to punish crimes, the Pope develops a less familiar strain in the tradition, citing Lactantius, Pope Nicholas I, and Saint Augustine against capital punishment. Francis cites his own past words calling "for the abolition of the death penalty" and also opposing life imprisonment.

These are just some of the preeminent points the Pope makes throughout this lengthy and very detailed document, to which I am sure we will return with greater specificity in days to come.

The encyclical addresses many issues, some of which will undoubtedly appear contentious in the American context, where a certain strain of American Catholicism seems increasingly more aligned with the President than with the Pope.

Francis concludes by invoking Blessed Charles de Foucauld's "journey of transformation towards feeling a brother to all." In a document focused on high-stakes issues of politics and economics and social and cultural policy, it seems a very fitting return - in the spirit of Saint Francis - to what is foundational for a full Christian life, exemplified in the modern era in "the universal brother," Blessed Charles de Foucauld.