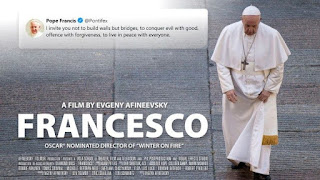 Francesco, the new documentary about Pope Francis, directed by Evgeny Afineevsky,  made its U.S. debut yesterday at the Savannah Film Festival. For a lot less that what it would have cost me to travel to Savannah, I bought a ticket and watched it in the comfort of my own home!

The film follows Francis' pontificate (largely through archival footage), highlighting his personal style and way of addressing issues of global import. It begins with the sad scene of the Pope walking alone in a wet Saint Peter's Square during last march's pandemic Urbi et Orbi. Sad scenes of other empty cities highlights the Pope's message of how the pandemic has challenged us to rethink our priorities: "a time to choose about what matters and what passes away." In a sense that is the theme of the entire film.

The documentary illustrates the main themes of this pontificate. It starts with the Pope's expressions for the environment and about climate change and especially its damaging effect on the poor. There is also footage from his 2015 address to the U.S. Congress. Then on to the issue of immigration in its worldwide dimension. The film overwhelms its audience (as his journeys have undoubtedly overwhelmed Francis) with the immensity of this global humanitarian disaster.

The immigrant experience is a natural lead into the story of the Pope's own family, Italian immigrants in Argentina. We hear his account of his calling to the priesthood. The documentary does not hide from the criticisms levelled against him in his home country, and attempts a convincing response to those criticisms. It also delves into his complicated history with his own Jesuit Order and how, by his own admission, he learned form his early mistakes.

From his pre-papal experiences, we are introduced to his efforts at inter-religious dialogue, which bring us back to immigration and his evident repudiation of the wall ostensibly being built by the U.S. at its southern border. Were it not for another issue raised later in the film, this would probably have attracted the most media attention. The juxtaposition of the Pope's words with President Trump's speaks loudly, if briefly, as do other very brief scenes form the summer's American reckoning with racism.

It is just one more unfortunate consequence of the contemporary "culture war" that so much of that has been largely ignored by those preoccupied with a much narrower range of issues.

Unsurprisingly, the part that has gotten the most attention in the U.S. - and has riled up the Pope's predictable opponents - has been the Pope's words on civil unions for same-sex couples. The Pope is portrayed as saying: "What we have to have is a civil union law [ley de convivencia civil]. That way they are legally covered. I supported that."

The Pope's reference to his past support for such legislation presumably refers back to when Argentina legalized same-sex marriage in 2010 when then Cardinal Bergoglio, as Archbishop of Buenos Aires, unsuccessfully urged his fellow Argentinian bishops to support civil unions as an alternative. In a 2014 interview with Corriere della Sera, Bergoglio, now Pope Francis, reaffirmed the Church's teaching on marriage, but distinguished from that the civil society's efforts to regulate relationships in terms of their economic and social effects, for example, health care. Presumably, the Pope regards such civil arrangements and protections as falling within the legitimate autonomy of the state. Unless one is willing to abandon completely the post-conciliar project of peaceful coexistence with modern secular pluralistic societies, some acceptance of the state's claim to legitimate autonomy in the sphere of social and economic arrangements seems unavoidable. It is plausible that a less confrontational position on civil unions, such as that Bergoglio was proposing in Argentina, might have opened up some space for political compromise. It is plausible that by excluding the possibility of any compromise, the most extreme outcome became that much more likely

In the U.S., at least since Obergefell v. Hodges (2015) forestalled further public discussion and possible compromises through the political process, legal marriage equality has largely left civil unions behind. But the Catholic theology of marriage cannot incorporate that outcome. So, in a sense, all civil marriages not recognized by the Church (same-sex marriages obviously, but also, for example, all "traditional" marriages where one or both spouses are civilly divorced from a still living partner) are, in effect, "civil unions" as seen from the Church's perspective. In speaking about them in this way, the Pope has provided a more positive framework for relating to those in such unions, one which respects both the Church's own irreformable teaching on marriage and the legitimate autonomy properly exercised by civil society in its own specific sphere.

Admittedly, in its 2003 Considerations Regarding Proposals to Give Legal Recognition to Unions Between Homosexual Persons, the Congregation for the Doctrine of the Faith appeared to take a more restrictive view regarding acknowledging civil society's autonomy to regulate non-marital relationships (non-marital from the Church's perspective, regardless of how the state labels them). Presumably the Pope is here again proposing a more expansive (but hardly radical) interpretation of the legitimate autonomy of civil society.

The confusion arises because fidelity to the doctrine about the nature and purpose of marriage often gets contrasted with the actualities of legislation in a non-confessional secular state with a pluralistic population. The 2003 Considerations actually acknowledged that it did "not contain new doctrinal elements" [1]. The doctrine remains what it has always been, that marriage "was established by the Creator with its own nature, essential properties and purpose" [2]. Neither this nor any other pope is able to change that. The 2003 Considerations was a doctrinally informed guide to political activity in certain circumstances, circumstances which constantly change, and which certainly have changed significantly since 2003.

The CDF Considerations acknowledged that civil law's scope "is certainly more limited than that of the moral law" [6]. Obviously in a non-confessional secular state with a pluralistic population (for example, the United States), it is hopeless to expect that civil law will ever completely conform to the moral law. Thus, the United States has long legally permitted divorce and civil marriage after divorce. One could substitute civil divorce and remarriage in the warning words of the CDF document in Considerations, 6.. Making that substitution, we would get: "Legal recognition of [civil divorce and remarriage] would obscure certain basic moral values  and cause a devaluation of the institution of marriage." That would certainly be true - even more so than in the case of same-sex unions, in that divorce is far more pervasive in society and involves many more people (husbands and wives, parents and children) than the much smaller number of same-sex couples. (Indeed, if there is any question about how faithfully the Church's teaching about marriage has been received in contemporary society, that problem predates the relatively recent legal debate about same-sex unions - as the divorce rate illustrates.)

While the Church in the past did mobilize (unsuccessfully) against liberalized divorce laws, that failure highlights the social reality that the Church must coexist with citizens with very different beliefs. This raises many practical and pastoral problems for the Church, which must minister to those in all sorts of irregular situations. That, of course, brings us back to the Pope's comments, which have nothing to do with diminishing the doctrine about the nature and purpose of marriage (which is irreformable), but have everything to do with creating space for a a more fruitful framework for relating pastorally in practice to the many who are in such unions.

The documentary depicts the Pope's personal charisma and highlights his ability to connect directly with people of all backgrounds and experiences. It seems intended to inspire imitation - pastoral efforts to overcome the many diverse barriers that otherwise may seem to exclude authentic encounter and dialogue of any kind.