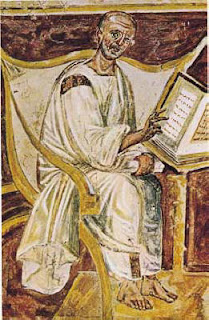 Much has happened in Church and society since Saint Augustine, Bishop of Hippo and Doctor of the Church, was born on this date in 354 (so 1667 years ago). Yet he still stands out as one of the most towering figures from the Church's history and one of those ancient figures who still speaks directly to today.

Besides being a perennial significant towering intellectual and spiritual figure in his own right, Saint Augustine seems especially relevant to our contemporary society, since he lived (and embraced an ecclesial vocation) at a time when Christianity, while definitely on the rise, was still not the only option, when traditional paganism and other religious and philosophical stances were still viable alternatives to Christianity for many. Augustine's spiritual journey was also an intellectual and cultural one, in that he grappled with the leading ideas of his time both in philosophy and in heretical forms of Christianity. How equipped are we today to do that? Or are we tempted instead to hide from this challenge?

At the same time as he engaged with the wider world, Augustine ended up as a provincial bishop in the somewhat self-enclosed province of Roman North Africa. Augustine's youthful spiritual journey led him to attempt a heroic break from the world, but then the Church pulled him back even deeper into engagement with the world. In the process, he experienced the historical process in which the Catholic Church had become the established Church, powerful in practice as well as in theory - yet a situation which was soon to collapse completely in Africa. Meanwhile, thanks to the pressure of such unexpected historical events, Augustine articulated a Christian philosophy of history, which challenged and broke with what was conventional wisdom, what we might call "Roman imperial exceptionalism," thereby definitively demystifying politics. Have we fully appreciated and appropriated that important lesson in the face of the moral threat of a certain sort of renewed Catholic integralism and American religious "exceptionalism"? These characteristics of the transitional time in which Saint Augustine lived  and in which he became one of the Church's dominant voices have a lot in common with our contemporary era in ways most other historical periods do not and hence provide ample opportunities for reflection.

That peculiar dynamic of difference and similarity between Augustine and us, between his Church and world and today's Church and world, also offer a multitude of practical questions we would do well to ask ourselves.

For example, it is obvious that Augustine's mother Monica was a genuinely formidable figure in her own right. In Augustine's life and world, she also served as an embodiment of Catholic tradition and popular piety and of their life-long hold on Augustine, constantly calling him to return. The absence of such traditional bonds for so many in our society today is significant, and makes us wonder whether anything remotely resembling Augustine's "conversion" can occur among those unmoored from the hold of tradition and popular piety., and what, if anything, can take their place. Likewise, Augustine grew up and lived all his life in a close-knit society of family and friends. How can faith be authentically lived and passed on successfully in our world of increasingly self-isolated individuals?

So much of our appreciation of Augustine is flavored by that monumental work of self-exploration known as his Confessions, which broke new ground in the ancient art of biography and still speaks to us about how a person's past experiences remain an active aspect of one's present personality. In his own late-life Retractationes, Augustine spoke of his "Thirteen books of my Confessions, which praise the just and good God in all my evil and good ways, and stir up towards him men's mind and feelings," which, "had this effect on me when I wrote them, and they still do this, when I now read them." May they continue to have such effects in us today!

(Photo: What is believed to be the earliest known portrait of Saint Augustine, in a 6th-century fresco at the Lateran, Rome).