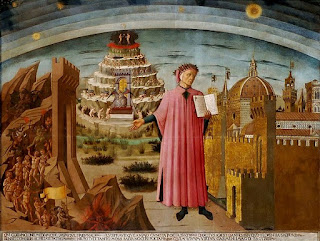 Finally (on Thanksgiving Eve), 100 Days of Dante descended to the frozen lowest lake of Hell, where he met up with Lucifer himself. Inferno has been a long journey into the appalling ugliness of sin and the eternal pointlessness of existence alienated from God. Now, starting the day after Thanksgiving with Dante we begin to climb the Mount of Purgatory. For some reason, he and Vergil find the shores of Mount Purgatory guarded by Cato, the famous Roman opponent of Caesar, who oddly appears here instead of in Limbo, and so serves (so suggests the professor commenting on Canto 1) as another expression of God's inexplicable grace.

Although for Dante it was Easter Sunday morning when he and Vergil arrived at the foot of Mount Purgatory, I will be making my literary way up Mount Purgatory in Advent, which like Purgatory itself  is all about hope, the beatam spem to which we refer daily at Mass, the "sure and certain hope" of the funeral liturgy's Final Commendation Rite.

Date's Purgatory is a mountain on the earth. After leaving hell, Dante and Vergil see the stars and then the sunrise, all things not seen in hell, which is deep underground. And the souls in Purgatory will people somewhat like us having experiences that still somewhat resemble our human world - with this important exception that there everyone is already assured that he or she is going to make it to heaven. But, like us, they are still on their way. Already justified, they are still in the process of being sanctified, which is the lifelong labor of discipleship in this world as its is in Purgatory.

(Photo: Domenico di Michellino's 1465 fresco showing Dante exiting Hell with Mount Purgatory and the earthly city of Florence in the background and Heaven above.)