The Dead and the Still Living 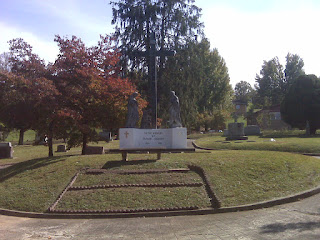 The (increasingly muted) observance of All Souls Day has recently reminded me of a class paper that I wrote in seminary, some 36 year ago. It was called "The Difficult Funeral" and was a theological-pastoral reflection on the inadequacies of our contemporary practices surrounding funerals. If anything, the concerns surfaced then seem even more salient now, while my current lack of direct pastoral responsibilities liberates me, so to speak, to reconsider those concerns.

The funeral ritual operative in the Roman Rite until the late 20th century understood its funeral rituals as "bearers of true religious mysteries and signs of Christian piety, as well as most salutary intercessory prayers for the faithful departed" and saw such rites as providing "for the spiritual welfare of the departed and likewise for the edification of the living" (Roman Ritual, 1614). Faithful to Vatican II's 1963 liturgical Constitution, the post-conciliar rite retained those traditional themes, but incorporated them into a new framework oriented to a new emphasis - that funerals "should express more clearly the paschal character of Christian death" even in regard to the liturgical color that is used (Sacrosantum Concilium, 81).

In the immediate experience of the chaos of the post-conciliar liturgical reforms, it was likely the change of color that expressed most visibly and dramatically the novelty of the new rite - especially here in the U.S. where white has become the standard color for the funeral Mass. (The traditional color, black, by then had become almost exclusively attached to Masses for the Dead in the Roman Rite reflecting its secular role in the West as the color of mourning.) This change of color, however problematic in appearing to de-legitimize the emotions of grief and mourning, may be one of those relatively rare instances of the reforms not exceeding the Council's actual mandate. (In much of the world, penitential purple seems to be the norm - a change from the traditional mourning black, but perhaps not quite so radical seeming a change.)

While still new, the revised rite received lots of comment and criticism. In 1974, Schuyler Brown suggested, "The Madonna of Michelangelo's Pieta would probably feel out of place in the triumphant jubilation of a contemporary mass of the resurrection" (Worship, 48). In 1983, Richard Dillon saw "resplendent white vestments, artificially joyous rhetoric, and endemic forgetfulness of the Cross," all assisting :the denial of death in a self-indulgent civilization" (Worship, 57). Earlier, in 1981, Robert J, Hoeffner had faulted "an unimaginative and individualistic theology which brings a praying people to an empty silence" and "a deficiency or void in establishing a relationship between the living and the dead" (Worship, 55).

In retrospect, those observations seem even more on target today.  Sensitive as such comments were to the situation of a casual misappropriation of Christian hope then, what might be said now when Christina hope is itself barely believed in or widely understood or even remotely recognized?

In my 1985 paper, I contrasted the full funeral rite of three stages with two intervening processions with its increasingly common substitute - a single funeral service in church followed by a car ride to the cemetery and the abandonment of the body on a carpet of artificial grass. Nowadays that truncated aberration may have become an ideal, given the increasing likelihood of either a graveside-only service with no funeral Mass in church or a post-cremation service of some sort that is much more a "celebration of life" than the Church's intercessory prayer for the dead.

Even when there is a funeral Mass in church, the combination of silly secular songs,  problematic eulogies, and other clueless behavior has created an altogether new situation unanticipated in the still nominally Christian context of the late 20th century. I served as an altar boy at numerous funerals in the 1950s and never heard a sermon or eulogy. Since then with the renewed emphasis on liturgical preaching, a homily has come to be expected on virtually every occasion. Indeed, the current rubrics prescribe a homily which relates Christian death to Christ's death and resurrection and to our hope for eternal life. Except that such a homily is seldom expected or desired at a funeral anymore. What is increasingly expected is some sort of eulogy. Eulogies are certainly appropriate at civic memorials and the like, and some personal reference to the deceased is surely appropriate, especially when the deceased was actually known to the preacher. But the present practice is unsustainably problematic.

As for non-homiletic comments during the Mass, which may run anywhere from the occasionally extremely edifying to the pleasantly sentimental to strange expressions of certainty that the deceased is now happily getting drunk eternally with his buddies in heaven, the less said the better. Obviously, we have neither preached enough nor heard enough about how to hope for eternal life - or even about what we might mean by the eternal life for which we claim to hope.

Clearly, then, there is a need to recall the religious significance of Christian death not only at funerals but in a way which is integral to the ordinary practice of Christian life. That, of course, will not directly help those who are absent from church or who are encountered only at funerals. It should, however help those few who still do go to church regularly to have a better understanding of what to expect at a funeral, and it could also help the preacher and anyone else who has a speaking role at a funeral.

In my own preaching practice, my preference has consistently been to stick with the traditional funeral gospel (John 11:21-27). The fact that for 15 centuries this was the preferred text for funerals constitutes a significantly relevant recommendation, as well as the fact that the situation described in the account - Mary and Martha and their friends and neighbors gathered together to mourn Lazarus - so resembles and resonates what we are actually assembled to do at a funeral. I have however, also come to appreciate the use of the Old Testament at funerals. The honest emotion of Old Testament piety and the intense trust in God's faithfulness to his covenant people, even in spite of death, represents a powerful counter-cultural message amidst our contemporary, increasingly dishonest talk about death in a world in which people just "pass."

All of which brings one back to the underlying problem of our increasingly weakened relationship between the living and the dead, the very relationship which today's observance of All Souls Day is particularly intended to celebrate. The covid-19 pandemic in particular has further damaged the fragile texture of so many important social relationships, many of which were already weak in our society. So many people died alone during the pandemic, and so many families were denied the opportunity to celebrate the traditional rites of mourning that are so connected with the relationship between the living and the dead. As with so many religious and social practices, it is unclear how much may have been lost not just for the duration of the pandemic but for the foreseeable future.

The late 20th-century concept of sacramental celebrations as "teachable moments" may be less and less meaningful in our increasingly secularized, unchurched society. To the extent, however, that many people (not necessarily always knowing why) still turn up in churches for funerals in at least some form, those occasions remain a special opportunity to rediscover the relationship between the dead and the still living. For that to happen, however, a lot will have to happen differently from the way things are presently heading.