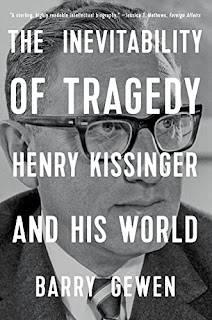 Henry Kissinger has been a private citizen now for 44 years, but he is far from forgotten and his insights into power politics and international relations remain as relevant as ever - and, in light of the current trajectory of both American domestic politics and foreign relations, maybe more so. Long-time NYTimes Book Review editor Barry Gewen has answered this need with The Inevitability of Tragedy: Henry Kissinger and His World (Norton, 2020).

This book is not a biography in the conventional sense, although it does treat in detail what was apparently the formative event in Kissinger's life, the ignominious collapse of the Weimar Republic, exhibit A for the thesis that democracy give no guarantee against either domestic tyranny or international conflict. Kissinger, of course, was one of many similarly situated German Jewish intellectuals who fled Germany (or escaped in just the nick of time) and found a safe refuge in the United States, but who remained in some ways at heart always Europeans, always a bit ambivalent about certain aspects of their adopted country.

So Gewen takes the interesting approach of linking Kissinger's story with those of three other (and older) major figures from among the 20th-century German-Jewish intellectual diaspora - Leo Strauss (1899-1973), Hannah Arendt (1906-1975), and Hans Morgenthau (1904-1980). To someone seeking a retelling of Kissinger's career as academic intellectual and foreign policy expert and then U.S. National /security Adviser and Secretary of State under Presidents Nixon and Ford and still consulted elder statesman, Gewen's detailed treatments of Strauss, Arendt, and Morthgenthau may seem more than expected, but they are critical components of Gewen's analysis. (As a one-time academic political theorist, I especially appreciated his treatment of those three towering figures and the philosophical debates that surrounded them and their ideas throughout their active lives.)

Gewen does deal with Kissinger's political career and the sometimes till controversial policies he was associated with - among them, the Nixon Administration's response to Salvador Allende in Chile, the way the Nixon Administration continued and then ended the Vietnam War, and the general approach to the Soviet Union that came to be called Detente. And he likewise deals with the intense opposition Kissinger roused on both the left and the right. But all this is in service of the larger themes of the book, among them the limitations of the democracy, the need for realism in policy-making, and the recurrent threats of moralism and populism.

In Gewen's words, "Kissinger, Strauss, and Arendt were Germans who cherished what German had given them but were deprived of their identities by the Nazis; Jews who never denied their backgrounds but for whom the content of Judaism was a problem and Zionism no solution; naturalized Americans genuinely appreciative of the shelter the United States had provided to them but whose patriotism did not translate into a wholehearted identification with their adopted country; freethinking individuals who opposed tyranny but nursed a deep suspicion of democracy and its majoritarian processes; moralists whose post-Nietzchean morality, difficult to articulate at best, rested on none of the traditional ethical foundations ... They accepted the findings of modern science ... while denying it could provide answer to life's most profound questions or unravel its deepest secrets."

The last observation especially highlights their quarrel with "political science" as that discipline  had come to define itself. Gewen quotes my own grad school mentor Sheldon Wolin, who said Arendt "occupies a special place in the history of political theory," which she rescued from "the dreary and trivial categories of academic political science." Setting Kissinger's public career within this context illuminates important aspects of 20th-century intellectual history and political philosophy. And it explains his complaint that contemporary leaders lack "cultural preparation," reflected in "the study of history and philosophy, the disciplines most relevant to perfecting the art of statesmanship."

Gewen particularly highlights the clash between Kissinger and the "Wilsonianism" that has served as a kind of orthodoxy on both the left and the right for the past century. He calls the Wilsonian mindset "melodramatic and absolutist," and repeatedly recalls that "democracies did indeed go to war against one another, and they could be as oppressive to their own minorities as any authoritarian regime."

Gewen's treatment of Kissinger's policy of detente, which so alienated him from both the neo-conservatives and the populists on his right may be especially timely today as a counter to the temptation to revive "Cold War" categories in relation to China. It was Kissinger's critical insight that "only a settlement without victory or defeat could create stability."

Kissinger shared Hans Morgenthau's understanding of the critical difference between domestic politics, where disputes could "be settled through the instrumentalities of liberal rationality" and the very different national arena. One wonders whether what we are seeing in the U.S. right now is the collapse of that "benign context" of domestic politics and its transformation into something more resembling the international arena of "different values, different traditions, different beliefs."

Now more than ever, Kissinger's approach to political philosophy seems out of sync with our contemporary extremes of moralism and populism. All the more necessary then may be the emphases Gewen distills from Kissinger: "the imperfectability of man, the unpredictability of consequences, the prospect of arriving at no permanent solutions, the inevitability of tragedy."