Arguing About the Eucharist 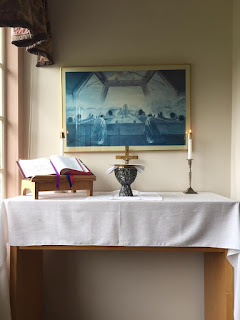 The Mystery of the Eucharist in the Life of the Church is the working title of the USCCB draft document due to be debated, as everyone knows, at the U.S. Bishops' meeting this week. Well, of course, most people probably don't know, nor perhaps do many of them care. But those who do care about such documents do know!

The history of this document has been enveloped in controversy from its inception, thanks to its presumed relationship to the unfortunate controversy concerning the reception of Holy Communion by our second Catholic president and other Catholic officeholders. Putting that perilous controversy aside for the moment, this document is apparently also a response to the growing concern about American Catholics' understanding of and belief in the Real Presence.

Here too there is controversy. Recently, at the liturgical blog Pray Tell, which "promotes the ongoing renewal of the liturgy and its transformative effect in the life of the Church and the world," a recent post, “Draft of bishops’ Eucharist document reflects 400-year-old theology," not only strongly criticized the USCCB draft but in turn unleashed a storm of argument about it on that site.

The claim that the USCCB document reflects something called a "400-year-old theology" (whatever that means) is, indeed, strange, if for no other reason than that the document is littered with quotations that are considerably less than 400 years old - from, among others, Pope Francis, Pope St. John Paul II, Pope St. Paul VI, Vatican II, the post-conciliar Roman Missal, the Catechism of the Catholic Church, St. Teresa of Calcutta, Dorothy Day, Bl. Carlo Acutis, St. Jose Sanchez del Rio, and, of course, the USCCB itself. Admittedly, it also quotes the New Testament, St. Augustine, St. Basil the Great, St. John Chrysostom, St. Irenaeus, St. Thomas Aquinas, and the Council of Trent. - all 400 years old or more. But, then, this is a Catholic document, purporting to teach the Catholic faith, which represents a continuity of faith and practice that is in fact far older than 400 years! If there are flaws to be found in the document, by all means they should be addressed. But it is hardly a fatal flaw to try to be in continuity with the first millennium and a half of Catholic belief and practice. (How successful and complete that attempt at continuity is, of course, another question.)

Unsurprisingly, therefore, this document really says nothing new about the Eucharist. Why should it? It restates the long-established faith of the Church, with appropriately hortatory exhortations to the faithful. More important than academic quibbles ought to be questions like what is the purpose of this document, to whom is it addressed, and what might it accomplish?

The infamous Pew study that apparently triggered all this anxiety about what American Catholics actually know and believe about the Eucharist preceded the pandemic, which has since created a whole new context for eucharistic anxiety. Very fittingly, the Bishops begin the document by recalling Pope Francis' March 27, 2020, pandemic prayer service in an empty Saint Peter's Square. they also acknowledge that the pandemic is still with us and has impacted all our lives in many ways, including our ability even to participate in the Eucharist. In such a situation, perhaps, what may be more needed by was of instruction would be an encouraging invitation to all to return!

Obviously the document discusses Real Presence. It cites Pope St. Paul VI on how the eucharistic real presence does not exclude other experiences of Christ's presence and helpfully explains the term "substantial" as conveying the totality of Christ's gift to us. There are two paragraphs on eucharistic devotions, which have long played an important part in popular piety - and are increasingly doing so now. Personally, I think understanding how people experience the Eucharistic presence in popular piety may matter much more for many people than arguments about abstract philosophical formulations.

Paragraph 25 stresses the importance of the Sunday obligation as "a vital expression of our unity as members of the Body of Christ, the Church" and "a manifestation of the truth that we are utterly dependent upon God and his grace." Given the calamitous decline in Mass attendance in recent decades and the catastrophic effect of enforced absence from Mass during the pandemic, this section is obviously extremely timely, although again it is unlikely that those who are no longer attending Mass will be reading this document, or would find this approach particularly welcoming.

Helpfully, the document also repeats Pope Francis' recent warning about "eccentricities" and "abuses" in the celebration of Mass. If anyone is serious about addressing an impoverished understanding of and belief about the Eucharist, one place to start is the irreverent ways in which Mass has sometimes been celebrated and Communion administered and received in the past six decades.

Probably, none of this will be of much interest to the secular media (the main vehicle through which ordinary Catholics will likely hear about this, if they hear about it at all). What will likely interest the secular media is the discussion of mortal sin in paragraphs 41-42 and the citation of 1 Corinthians 11:27-29, where St. Paul warned against unworthy reception of Communion (the passage famously excised from the lectionary in the post-conciliar reform). This gives an opening to repeating what the Bishops have previously said regarding Catholics who "knowingly and obstinately" reject defined Church doctrines, "or knowingly and obstinately repudiate her teaching on moral issues," thereby diminishing their "communion with the Church," and who therefore should "refrain" from Communion.

Of course, what this formulation obscures is the distinction between "obstinately" rejecting and repudiating Church teachings and the very different issue of how a conscientious Catholic can and should fulfill his or her duties as a public official in a pluralistic society in which, inevitably, not all laws correspond to Catholic doctrine and moral teaching. For a politician, it is the difference, as John F. Kennedy famously formulated it in Houston in 1960, between being "the Catholic candidate for president" and being "the Democratic Party's candidate for president, who happens also to be a Catholic." That distinction is at the heart of the current controversy. That distinction does indeed deserve to be addressed (preferably in a less polemical context). Leaving it unaddressed meanwhile leaves the issue unresolved and allows all parties to return to their separate corners to continue the conflict with no obvious end in sight.

Against such an outcome, Saint Paul's warning and his command to engage in individual discernment speaks powerfully about what Paul was so strongly upset with the Corinthians about - divisions and disunion within the community. Well might we examine ourselves regarding the increasing tendency to prioritize partisan political allegiances more than the unity of the Body of Christ.

If, moreover, the pastoral purpose of a document such as this is simply to restate in reasonably accessible language the long-established faith of the Church regarding the Eucharist, then might that purpose be met as well by not entering the political thicket at all and just saying what most of the rest of this document says? After all, through the Eucharist the Risen Christ challenges us (in Augustine' famous formula) to become what we receive, a challenge which becomes the lifelong mission of discipleship. It may be legitimate, therefore, to talk about circumstances which may separate us from God and the Church, but - given the alienation of so many from the Church's sacramental life and the increasing incomprehensibility of Catholic religious and moral language to so many in our society - that may not necessarily be the most helpful thing to emphasize.

In a way, this predicament reminds me of the traditional Communion rite in the 1662 Anglican Book of Common Prayer, which contains a "warning" Exhortation - followed, however, by an alternative version, presumably more suited to the situation, to be used when people are "negligent to come to the holy Communion." Maybe there is a lesson in that practice and possibly an opportunity being missed here.

Of course, absent any political controversy, it would seem somewhat unlikely that the final version of this document, however attractively framed, will be very widely read. Most people do not naturally gravitate to Church documents. Instead, the Church needs to reach out to them. Meanwhile, the toxic divisions in both Church and society continue eroding the Church's effectiveness in so many areas.

If, however, bishops, priests, and catechists are somehow inspired by this process to address positively our understanding of the Eucharist, the devotional practices we employ to express that faith, and the reverence this great sacrament ought to require from all of us, then an admittedly limited but nonetheless valuable purpose perhaps may have been served.