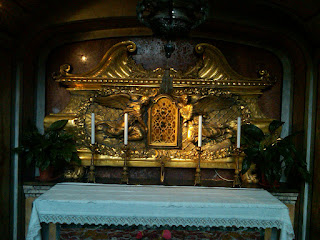 Pope Saint John XXIII's decision in January 1959, shortly after his election as pope, to convoke an ecumenical council came as a complete surprise to most people (including to me as a 10-year old Catholic school student who until then had hardly even heard of an ecumenical council). But John's action was rooted in his lifelong interest in history, especially the history of the Council of Trent and its implementation in northern Italy by the great Saint Charles Borromeo (1538-1584), who became Archbishop of Milan in 1564, and whose feast is commemorated in the Church's calendar today.

As a young priest in the early years of the 20th century, Angelo Roncalli served as secretary to the Bishop of Bergamo, taught Church History in the diocesan seminary, and researched the records of the canonical visitation Borromeo had conducted in Bergamo in 1575 as part of the general religious renewal inspired by the Council of Trent, which after several fits and starts had finally finished in 1563. It was, Roncalli wrote, "a time of potent reawakening of energies which has no equal in any other period of church history." He particularly admired the preeminent part played by Saint Charles Borromeo in implementing Trent's reforms. Elected Pope at the end of October 1958, Roncalli was happy to schedule his coronation for November 4, Borromeo's feast day, and devoted three paragraphs of his coronation Mass homily to Saint Charles. Although Boromeo's body is buried (where one would expect) in the crypt of the Duomo in Milan, his heart is kept in a reliquary (photo from my time in Rome in 2012)) in the church of San Carlo al Corso in Rome (near the Spanish Steps), where Pope Saint John XXIII went to venerate it in 1962 in preparation for the opening of the Second Vatican Council.

Thanks to such towering 16th-century Churchmen as Saint Charles Borromeo, the Council of Trent's reforms had had an especially strong impact in Pope John's native region and so served for Pope John as a model what the Church needed in the mid-20th century.

(At https://www.youtube.com/watch?v=qTmHIguIKBw one can access the 25 videos recording most of the John XXIII's November 4, 1958, Coronation Mass - minus the homily, however.)