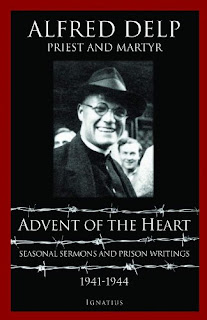 Less well known in the U.S. than more famous religious resisters like Dietrich Bonhoeffer, Alfred Delp (1907-1945) was a German Jesuit priest, remembered now for his opposition to the Nazi regime, in particular for his participation in the Kreisau Circle, an ecumenical clandestine group that sought to imagine a model for a post-Nazi Germany. Although not involved in the aristocratic July 20 plot against Hitler, Delp was arrested in the post-plot crackdown. While not accused of participating in the plot, he was convicted of treason because of his other resistance-related activities and was executed on February 2, 1945. The son of a Protestant father and a Catholic mother, Delp had joined the Jesuits in 1926, was ordained a priest in 1937, and professed his final Jesuit vows while in prison in 1944. In one of his last letters smuggled out of prison, he wrote, "All of life is Advent."
Advent of the Heart: Seasonal Sermons and Prison Writings, 1941-1944, is a collection of Delp's homilies and Advent meditations composed mainly during the years 1941-1944, translated into English, and arranged not chronologically but liturgically, that is, according to the sequence of the Advent liturgy in the traditional Roman Rite. Thus, each "week" of Delp's meditations and sermons is preceded by the Latin text (and English translation) of the Proper of the Mass for that Sunday.
Back when I used to preach at the beginning of Advent, I always liked to emphasize how Advent is not play-acting, as if Christ has not yet come and we were waiting to see what would happen on Christmas. Fr. Delp made a similar point in his 1st Sunday of Advent sermon in Munich in 1941: "The main point of Advent is not merely to remember and reenact some kind of historical waiting. No, Advent centers on fundamental principles and fundamental attitudes of our lives, of life in general, and of existence in general." Hence the perennial importance of Advent, which recurs year after year regardless of what else may be going on in the world: "Somehow unaffected by all that has happened in the course of one year, somehow untouched by all the great and all the small, all the lovely and all the loathsome things that, in the course of one year, might affect the earth, on this first Sunday in Advent the Church gives voice to her ancient prayer: 'Ad te levavi animam meam'—'To You I lift up my soul.' [Ps. 25:1, the opening words of the traditional Introit for the 1st Sunday of Advent]. ”
Delp was apparently much attracted to the Advent imagery of "being deeply shaken" - a reference to Luke 21:26b, The powers of heaven will be shaken, in the traditional Gospel for the 1st Sunday of Advent, Lucan words which, by convenient coincidence we get to hear again this year. In his 1941 homily, Delp speculated whether "what we modern people need most is to be genuinely shaken, so that where life is grounded, we would feel its stability; and where life is unstable and uncertain, immoral and unprincipled, we would know that, also, and endure it." In a theme that obviously resonated with the wartime situation but which speaks as well to us today, Delp suggested "we have stood here on the earth with a totally false and inauthentic sense of security." Hence God is shaking the world "to teach us one thing again: how to be moved in spirit. Much of what is happening today would not be happening if people were in that state of inner movement and restlessness of heart in which man comes into the presence of God the Lord and gains a clear view of things as they really are."
Two years later, on Advent Sunday 1943, Fr. Delp returned to this theme of the primary reality to which Advent points, permitting the lights of Advent to "shine forth from within" despite the gloom and danger of the time. Accordingly, Delp suggests, the 1st Sunday of Advent "gives a particular expression to the objectivity of our existence. It enlightens our lives and dismisses what is questionable, so that we can believe in the brightness." Here, his focus was on the "true waiting" which characterizes both Advent and the human condition. "Life means waiting, not Faust-like grasping, but waiting and being ready. We are waiting for the terror of the night, and waiting for the day when this terror will have passed."
By the next Advent (1944), Delp was in Tegel prison in Berlin. No longer able to preach the Advent message, he nonetheless continued to meditate upon its meaning. What could be more obvious to someone in prison than "the powerlessness and futility of human life in relation to its ultimate meaning and fulfillment"? Yet, at the same time, he remained grounded in "the promise of God to be on our side, to come to meet us. God resolved to raise the boundaries of our existence and to overcome the consequences of sin." Once again, he highlighted how "the basic condition of life always has an Advent dimension: boundaries, and hunger, and thirst, and lack of fulfillment, and promise, and movement toward one another."
But this movement has "no interim finality" and must reject the temptation to self-deception. "May God help us to wake up to ourselves and in doing so, to move from ourselves toward Him. Every temptation to live according to other conditions is a deception. Our participation in this existential lie is really the sin for which we today—as individuals, as a generation, and as a continent—are so horribly doing penance. The way to salvation will be found only in an existential conversion and return to the truth."
Posted by City Father