The Last King of America (The Book) 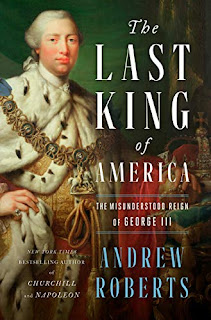 Britain's King George III (1738-1820) was the third Elector of Hanover (from 1814, King of Hanover) to reign as King of Great Britain and Ireland. He reigned for almost 60 years (1760-1820). George is best remembered by Americans as our last king, against whom the American Revolution was fought - and, as such, a character in the musical Hamilton. He is also remembered for his "madness," the illness that incapacitated him temporarily in 1788 (the subject of the 1994 movie The Madness of King George) and permanently from 1811 until his death. He is also somewhat more favorably remembered for being monogamous, religious, and relatively popular - unlike the rest of his Hanoverian dynasty (George I, George II, George IV, and William IV).

Now British historian Andrew Roberts, author of a 2018 biography of Winston Churchill, has filled in George III's larger story with a new biography, The Last King of America: The Misunderstood Reign of George III. Roberts readily calls George III “the most unfairly traduced sovereign in the long history of the British monarchy” and shows instead how America's much maligned last king was “well-meaning, hard-working, decent, dutiful, moral, cultured and kind,” while thoroughly presenting George's life and reign within the larger contexts of his Hanoverian house and of late 18th and early 19th-century British and world history.

Born June 4, 1738, at St. James's Palace, George III immediately, if unknowingly, broke one of the family customs of his dysfunctional dynasty.  In a family where fathers and sons routinely despised each other, Frederick, Prince of Wales, seems to have genuinely loved his son George. Although Hanoverian-born, Frederick identified as British (unlike his father and grandfather, George I and II), a quality he successfully instilled in his son. Roberts successfully sets George's early years within the confusing context of British factional politics and the lasting legacy of the Jacobite rebellions.  We learn about George's education and his reverence for the Glorious Revolution and William III. "Indeed, George regarded the British constitution with something approaching idolatry." At the same time, Roberts also seeks to dispel the "enduring myth that George II was the minion of his ministers, and that one of his successor’s aims was to restore those royal prerogative powers that George I and George II had allowed to fall into abeyance." He also highlights George's "deep-seated Christian faith." One result of this was how George's "religious piety and emphasis on personal virtue precluded the path of sexual infidelity taken enthusiastically by his father, grandfather and great-grandfather – none of whom had a strong Christian faith."

George, aged 22, succeeded to the throne in October 1760. At that time, Roberts notes, the country was still much as it had been a century earlier. It was, however, at war (The French and Indian/Seven Years War), and the Industrial Revolution would soon begin, leading to a doubling of Britain's population during George's reign.

While the Seven Years War was first and foremost a European war, we Americans rightly remember it as the French and Indian War, the outcome of which made the American Revolution possible and likely. Roberts quotes one of the King's contemporaries regarding that outcome: "I do not know whether the neighbourhood of the French to our northern colonies was not the greatest security of their dependence on the mother country, who I fear will be slighted by them when their apprehensions of the French are removed." In other words, if France had kept Canada, the consequent strategic threat to the thirteen North American colonies from the French might have kept them more loyal to the British Empire. Roberts gives this issue a lot of attention, even suggesting that King George would have done better to have visited the American colonies! I agree that it was a failure that "the King, politicians and civil servants completely failed to recognize was that the Seven Years War had fundamentally changed the strategic situation in North America. Britain’s decisive victory had at a stroke removed the French threat over the colonies." I do find his complaint that the King did not visit America somewhat strange, however, given the fact that "George never visited America, just as he never visited the rest of his dominions, including Scotland, Wales, Hanover and Ireland; indeed he never set foot in England north of Worcester or west of Plymouth in his entire sixty-year reign." (In fact, given the time it took to cross the Atlantic, etc., it is hardly surprising that no British King visited his Canadian Dominion or the U.S. until 1939!)

Royal travel aside, Roberts is on stronger ground, I think, in highlighting how British fidelity to commitments to the Indian tribes to limit colonial expansion westward after the French war was a major contributor to the conflict, since colonists (like George Washington) "saw the displacement of the tribes by waves of westward-heading Americans as inevitable." Likewise, he argues that George could have separated his British and American crowns (much as his Hanoverian and Irish crowns were separate) and many other contemporary monarchs held multiple separate crowns). "That George never considered pursuing the same route was a testament to his constitutionalism, albeit one that proved ultimately myopic: today this is the same arrangement that the British monarch has with the fifteen Commonwealth countries which the Westminster Parliament has no right to tax." Thus, while "Whig attacked George for trying to subvert the British constitution" the reality "was his unshakeable respect for it that helped him lose America."

Roberts effectively interweaves the story of the American crisis and war with the factional politics of the time, as well as the king's personal life and problematic family relationships. All in all, there is about as much detail as anyone would want about ministers' comings and goings, the "Wilkes and Liberty" affair, George's cultural interests, and, of course, about the Government's final failure to come up with an alternative American policy. Roberts believes "that the King and his ministers were prioritizing their crises unwisely." But hindsight is always 20/20. and, of course, we all already know how the American story ended, although the King's part in the saga will hopefully be more justly evaluated from now on, thanks to this book.

But enough about America!

Royal watchers will also surely be interested, for example, in the story of the passage of the Royal Marriages Act, which still has its effects today (as any fan of The Crown is aware). But, besides the loss of America, the main thing that everyone knows about George is his mental illness (exacerbated in its final episode by dementia). Modern conventional wisdom has afflicted the king with porphyria, but Roberts rejects this view, which he believes has "nonetheless skewed all the biographies written of him between 1969 and 2016," not to mention the famous play and movie. Instead Roberts proposes a diagnosis of "recurrent manic-depressive psychosis," specifically "bipolar affective disorder Type 1." His account of the successive episodes of "the King's malady" reflect the latest medical insights, while portraying the hapless king's sufferings with sympathy and respect

It was King George's lasting tragedy to be remembered mainly through the distortions of his real record by the leaders of the American Revolution and through his era's inadequate understanding of or empathy for those suffering from mental illness. Roberts does an excellent job of broadening that picture, of painting the larger canvas of George's life and reign, as well as correcting the prevalent but distorted history of the American Revolution along with ignorant and unsympathetic accounts of "the King's malady."