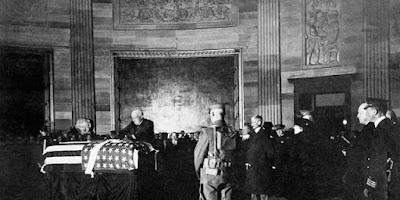 Today is the 100th anniversary of the interment of the American "Unknown Soldier" in the U.S. Memorial in Arlington Cemetery.  The ceremony took place on Armistice Day (now known as Veterans Day), the third anniversary of the end of the “Great War" in the Western Front. The U.S. was the fourth of the victorious World War I allies to memorialize the Great War and its national war dead in this manner. In 1920, the United Kingdom and France had buried their Unknown Soldiers in Westminster Abbey and at the Arc de Triomphe respectively. In 1921, Italy celebrated a Requiem Mass, attended by the King, at Santa Maria degli Angeli, and then buried its Milite Ignoto at Rome's Vittoriano (The Victor Emmanuel II National Monument celebrating Italian unification) on November 4, the third anniversary of the end of the war on the Italian Front.

Congress had approved the project earlier in 1921, and on Memorial Day four unknown soldiers had been exhumed from four World War I American cemeteries in France. From these one was randomly selected by a decorated U.S. Army Sergeant and transported on the U.S.S. Olympia from Le Havre to Washington, DC, where it lay in state in the Capitol Rotunda (photo) on the same catafalque that had held the remains of the three previously assassinated presidents — Abraham Lincoln, James Garfield, and William McKinley. The Armistice Day ceremonies were attended by President Warren Harding and the former, wartime President Woodrow Wilson.

Such solemn civic ceremonies have mostly been recorded for posterity and can be seen even today on YouTube. But, perhaps, a most familiar, if much simpler, such ceremony is the one at the end of episode 8 of season 5 of Downton Abbey, when the local village War Memorial is formally dedicated. All the standard features of British post-World War I war commemoration are there, including "We Will Remember Them," and The Last Post. But what is so memorable and evocative about the portrayal of that village ceremony is how everyone is there - from the Lord of the manor to the servants to the men and women of the village, veterans and survivors - all united in a common expression of seemingly inconsolable shared grief, a true testament to the universal impact of that terrible and pointless war on all burdened forever more with memory and sorrow.

For the British 1920 ceremony, go to: https://www.youtube.com/watch?v=giJlKBKzy-8

For the American 1921 ceremony, go to: https://www.youtube.com/watch?v=a8e-I7JRSgY