Is God Still Coming Back? 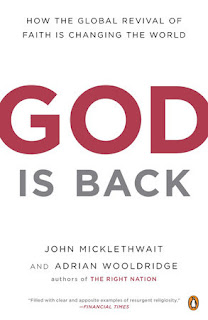 No, this is not a pre-Advent fervorino. And, yes, the Second Coming is still on schedule (whenever that may be).

Rather, my question - and it is just a question - is a belated 2021 response to a 2009 book by John Micklethwait and Adrian Wooldridge, God Is Back: How the Global Revival of Faith Is Changing the World (NY: Penguin, 2009). As its title suggests, the book argued against the standard "secularization thesis" and instead highlighted evidence for a global revival of religion. In particular, the authors highlighted the historically recognized and much commented upon (at least since de Tocqueville) American deviation from and exception to the pattern of secularization evident in Europe. In fact, religion in the U.S. has historically not only survived in putatively secular modernity but has actually thrived. Indeed, while the U.S. Constitution disestablished religion, the American Revolution was uniquely "not also an exercise in anti-clericalism." By separating church and state - for practical political rather than ideological anti-religious reasons - the American system ended up empowering religion. It recognized "that individuals have a right to choose their own religious opinions. And it introduced competition: churches had to get people in through the door."

All that had long been conventional wisdom about American religiosity, along with the authors' analysis of the specific successes of Catholicism in the U.S. What was perhaps most interesting and challenging about the book - at that time - was its thesis that, parallel to a supposed reshaping of the world by market forces, the same American-style religious free market was facilitating a global future for religion.

However, it is not to that global thesis that I am posing the question, Is God Really Still Coming Back? Rather, that question is directed to the specifically U.S. part of the authors' analysis. In other words, while accepting the authors' overall account of the trajectory of American religious history (including its 20th-century setbacks which the authors also acknowledged), have circumstances since significantly changed - in some seriously substantive way - since 2009, such as to warrant revisiting that familiar and quite comforting account of American religious exceptionalism?

The three 20th-century setbacks identified by the authors were the split between liberal and fundamentalist Protestants, the PR fiasco of prohibition and opposition to Darwinism, and post-war religious revival's potential to reduce religion to mere conventional social observance and "bland civil religion." Instead of the third being an actual setback, however, they argued that the late 20th century saw a sort of religious revival - rooted in "religious wars" (more commonly called culture wars) "ignited by the overreach of those bent on driving religion to the margins of American society." Unsurprisingly, they identified the disastrous Supreme Court decision Roe v. Wade (1973) as decisive. "By 2000, the country was split just as dramatically over religion as it had been in 1900 - but this time the split was not between different denominations ... but between people who were hot for religion ... and people who were cooler, whether they were atheists, modernists, or infrequent church attendees." Regarding the relatively unique case of American Roman Catholicism, the author acknowledged the reality of the enormous losses in membership being sustained by the Church, but highlighted how they were more than compensated by (especially Latino) immigration.

Obviously, this book belongs to the first decade of the 21st century. Just as obviously, a lot has happened and a lot has changed since then. The social and political and more particularly the moral and cultural landscape has dramatically changed in the past decade or so - changed so dramatically that certain aspects of American society have become almost unrecognizable.  This relatively rapid change has presented and is presenting sudden and somewhat unexpected challenges for religion (particularly Christianity).

I recently read an article, "The Failure of Evangelical Elites," by conservative Christian Professor Carl R. Trueman, in the right-wing intellectual journal First Things. Without endorsing all aspects of Trueman's argument, I think his salient point in this connection is the categorical difference between previous challenges to Christianity, which posited that Christianity was intellectually implausible, and a "postmodern," contemporary critique that considers Christianity "morally reprehensible." Trueman emphasizes how little, short of complete cultural capitulation, Christianity can do to overcome this new conflict with the enforced orthodoxies of postmodernity.

That does not mean, of course, that Christianity cannot continue to profess its traditional faith. But it does, I think mean that, apart from some surprising breakdown in the culture's postmodern consensus, it will be increasingly difficult for Christian faith to get much of a hearing in society and so successfully compete in the prevailing moral and cultural marketplace.

I am reminded of Augustine-scholar Peter Brown's observation that the congregations to whom Saint Augustine was preaching "were not exceptionally sinful. Rather, they were firmly rooted in long-established attitudes, in ways of life and ideas, to which Christianity was peripheral" (Augustine of Hippo: A Biography, 1967, p. 243). In the contemporary case, the chronology is reversed. Christianity is old, and it is new attitudes, ways of life, and ideas which have quickly become firmly rooted, and to which Christianity is peripheral.

The surprisingly swift triumph of postmodernity in a society which was supposed to be a citadel of religious exceptionalism, even in spite of what Walter Lippmann famously called the "acids of modernity," certainly does not call into question Micklethwait and Wooldridge's Tocquevillian analysis of religion's surprising strength in 19th-century America.  Nor does it negate the real vitality of religion in 20th-century America. And it certainly says nothing definitive about the wider role for religion in the global context, where the postmodern moral and cultural obsessions that are threatening to tear the U.S. apart today are largely irrelevant. But it may call into question what was thought to be happening within the religious world as recently as a decade or so ago. It may even reopen the question as to whether what was perceived to be a late 20th-century religious revival was really a revival and whether it really was adequate to forestall American religion's becoming (as the authors then feared) mere conventional social observance and "bland civil religion" - or, in our contemporary context, basically a badge of tribal identity in a politically defined social and cultural civil war.

Of course, God has never left and never will leave his world, but whether "God is back" in a way which reinforces the complacent expectations of American religious exceptionalism is quite another matter.