A Blessing in the Shadow of Death 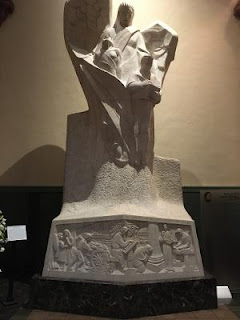 Servant of God Isaac Hecker, the founder of the Paulist Fathers, died on this date in 1888, at age 69.
Hecker's final illness had intensely focused him on the one most important thing – his relationship with God – ultimately a greater and more important thing than anything one does in life. In sentiments that somewhat recall those of Saint Thomas Aquinas shortly before his death, Hecker expressed his own experience: "There was once a priest who had been very active for God, until at last God gave him a knowledge of the Divine Majesty. After seeing the majesty of God that priest felt very strange and was much humbled, and knew how little a thing he was in comparison with God." In his final years, Hecker lived what one of his favorite spiritual authors, Jean-Pierre de Caussade (1675-1751), called “the sacrament of the present moment.” Caussade had written: “To be satisfied with the present moment is to relish and adore the divine will moving through all we have to do and suffer as events crowd in upon us.”
In his eulogy at Hecker's funeral, the Jesuit Provincial recounted the scene at Hecker’s deathbed, when his fellow Paulists asked him for his final blessing. Hecker "roused himself from the depth of pain and exhaustion, and his ashen lips which death was sealing pronounced the singular words … “I will give it in the shadow of death.” His feeble hands were raised, and like a soldier dying on the field of battle he reconsecrated his followers in the name of the Father, Son, and Holy Ghost for the struggle in which they had chosen him as Leader."
Eulogizing Hecker after his death, Bishop John J. Keane (1839-1918) wrote: "He has planted germs of thought, of aspiration, of life-purpose in many and many a soul, in every rank of the church, in every corner of our country; and they will go on fructifying, to his honor, as well as for the glory of God and the welfare of the world."
Animated by an increasingly conscious appreciation of God’s Providence, Hecker had opened himself to be guided by the Holy Spirit, whose presence and action he discerned in God’s care for him, and through that experience he had recognized the grace to attach himself to the Roman Catholic Church for the rest of his life. Himself a product of the religious fragmentation of American society, but drawn by God’s providential grace to seek the light of truth and find it in the unity of the Catholic Church, he then committed himself completely to share what he had found with others similarly inspired to seek and to find, and to whom his story continues to speak. All his diverse pastoral and missionary efforts and accomplishments would remain rooted in his abiding trust in God’s presence and action in his own life and in the world in which he lived. His conversion was complete, and his spirituality was generously and determinedly evangelizing – expressing a prayerful, lifelong, intimate dedication to and cooperation with God’s design for human beings.
His enthusiastic embrace of the Church led him to an active vocation as a priest and religious, giving his all to cooperate with God’s grace in serving God, the Church, and his contemporaries. His difficulties as a student had helped him to discern that his own sanctification and whatever efforts he might in time expend for the salvation of his fellow-Americans would themselves be products of God’s grace, according to the means God gave him.
Thus formed by Providence through the crucible of contradictory experience, Hecker lived a consecrated life of priestly mission as a parish pastor, a preacher of missions, a public speaker lecturing to Catholic and non-Catholic audiences, an author and apologist, and the founder of a religious community, which, as a canonically approved clerical Society of Apostolic Life in the contemporary Church, continues his charism “to be a dwelling place for the Holy Spirit and a prophetic instrument for His sanctifying action.”
Finally, he  surrendered himself and all his activities to the call to conform his life to the mystery of Christ’s Cross – filling up, in the words of his patron, Saint Paul, what is lacking in the afflictions of Christ, on behalf of his body, which is the church (Colossians 1:24).
Through it all, Hecker lived a life of recognizable holiness. His reputation for sanctity was evident in his own lifetime and has continued to inspire pastoral and missionary zeal in the Church down to today. Summarizing Hecker’s legacy, one of his 20th-century successors as Superior General of the Paulist Fathers, Joseph McSorley (1874-1963), wrote that Hecker manifested “a magnetic power commonly associated with personal holiness.”
In his life as a Catholic convert and a priest, Isaac Hecker practiced the theological and moral virtues to an heroic degree, confident that he was “living and working in the dawn of light of an approaching, brighter, more glorious future for God’s Holy Church." 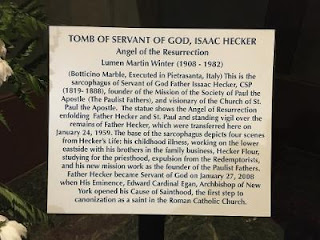