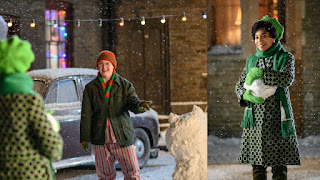 Mother Mildred, the Mother Superior, reappeared at her Order's London mission, Nonnatus House, just in time to be part of a very busy Christmas at the even more than usually, strained to capacity East End maternity home, and just as Lucille and Cyril were set to celebrate their much anticipated wedding. What better place to be on Christmas night, what better way to end Christmas Day, than with the Call the Midwife 2021 Christmas special on PBS?

The year is 1966. Last year's Christmas special took us to the Outer Hebrides, which was wonderful to visit (apart perhaps from the fact that some of the Scots Presbyterian locals didn't care much for Christmas). This year, however, the crew stayed closer to home. As always, there were challenges and problems, some frightening birth situations and novel learning experiences. And, fortunately, Mother Mildred was able to draw on earlier experience on how to save an already drug-addicted newborn. As always, over these last 10 seasons, despite the occasional ethical misjudgments and morally misplaced priorities that afflict human interactions, good things keep happening. And, since it is Christmas after all, we get to hear some Dickens, before attending a beautiful Boxing Day wedding. All in all, a loving holiday tribute to the strength and sacredness of the binding ties of various kinds of communities.

In the Paul VI liturgical calendar, today (the Sunday after Christmas) is the feast of the Holy Family, a modern (1892) celebration, one which, I must admit, I have never fully felt unambiguously enthusiastic about. American Christianity, which is increasingly more about sentimentality than salvation, notoriously tends to focus a lot on family, forgetting perhaps that Jesus and the New Testament in general were much more focused on God’s kingdom and showed relatively little interest in marriage and family life. In this contemporary social and ecclesial context, today's feast easily lends itself to an ahistorical and ideological romanticization of the modern nuclear family, whereas for much of human history - including obviously the time of Jesus - "family" for the most part usually meant something more extensive, while the basic social unit, the oikos, the household, often included multiple generations of relatives (direct and collateral kin), along with non-blood-related retainers, servants, apprentices, etc. (There is a hint of that even in today's Gospel, which refers to Mary and Joseph journeying with "relatives and acquaintances.") It was a much more expansively social sense of "family" - much as the Call the Midwife nuns, lay nurses, the doctor with his wife and children and receptionist, and diverse other neighbors formed a sort of inclusively expansive "family," which would have been recognized by all involved as family-like.

To be fair, given the diminished prospects for family formation in American society today, a sincere word of praise for family life may seem somewhat in order right now. That said, today’s feast should be about so much more than that.

Like those Old Testament parents Hannah and Elkanah, about whom we hear in today’s 1st reading (1 Samuel 1:20-22, 24-28), today’s Gospel (Luke 2:41-42), portrays a devout Jewish family, faithful to their religious obligations and obedient to God’s Law. Our modern “adolescence” not having been invented yet, Jesus in today’s Gospel was old enough (12), to be expected to assume his adult responsibilities and obligations as a member of God’s Chosen People, and so he accompanied his parents and their extended familial and social network on their pilgrimage to Jerusalem.

Hannah and Elkanah, and Mary and Joseph were families dedicated to the Lord, whose sons' lives would take them far beyond the limits of familial relationships. For us, likewise, through the Church, our new relationship with God in Jesus incorporates us into a new network of relationships both wider and more inclusive than any narrowly familial relationships. Jesus introduced what the 2015 "Synod on the Family" called a “revolution in affection,” which represents “a radical call to universal brotherhood” [Synod 2015 Final Report, 41].

In our modern world, the social functions and so the very forms of family are in flux, as are all communities and forms of social connection, something that was already beginning to be evident for the Call the Midwife community in 1966. Today, while there are still old-fashioned extended families and modern two-parent, nuclear families, there are also single-parent families, and “blended” families, and other complicated configurations, while tragically there are also more and more people passing through much of life alone, with hardly any recognizable "family" at all. (Less than half the adult population in the United States is married now, compared with more than three-quarters of the population half a century ago.)

The example of the Call the Midwife community and, in particular, the presence and ministry of the nuns, remind us that the Good News of God’s Kingdom offers the support of much needed contemporary communal solidarity, combined with a long and strong tradition of moral and spiritual seriousness, that challenges all of us to accompany individuals and families of all types, who are stressed in so many ways, to advocate for sound public policies that benefit parents and children and communities that support them, and to instill in individuals and families a stronger sense of belonging to that larger human community that is the Church on earth.