A Church for a Divided World 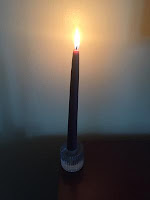 Earlier this week, while  concluding my Advent recollections of the Jesuit Alfred Delp's wartime Advent homilies and prison meditations, I adverted to David French's recent post, "The Wounds Politics Cannot Heal." In that piece, French focused on yet another survey highlighting the impact of America's contemporary class divide (i.e., between those college educated and those non-college educated) and the sad fact that "America's less-educated, working-class citizens have fewer friends, have less-stable families, and participate in religious life less than their college-educated peers."

Along with many others, French worries that "as religious and civic engagement declines, too many Americans are replacing religion with politics, and the false god of politics does not present the answer for what ails our hurting nation." For French, "political combat or the hope of an inspiring campaign can provide a sense of purpose, but it's a thin gruel compared to the holistic impact of a loving family of deep relationships, and of a healthy church."

Now (again along with many other observers of our sadly fractured society) I largely agree with French - at least on this issue.

But what if the desired "healthy church" may be at present not so healthy, at least not so healthy as it might otherwise be, were it not itself so divided within and so poor at promoting its fundamental message to those increasingly "disaffiliated"?

That was one way into this dilemma taken by Ross Douthat in last Saturday's New York Times. In that column, Douthat introduced this larger topic with an anecdote about the circumstances surrounding the Dominicans' departure from his local Connecticut parish, which prompted him to suggest "today's official Christina leadership feels more at sea, more subsumed into partisan identities ... and more baffled about how to handle the continuing reality of Christian disaffiliation."

Now I personally know nothing about the specific situation in Douthat's particular parish or the motivations of and internal conversations within and among the diocese and the Dominicans. So I can neither endorse nor dissent form his interpretation of that situation. But his larger claim, which he purports to see illustrated in that local case, does point to a widely held perception of institutional weakness in much of American religion at this particular time, a larger picture which inevitably seems to circle back to what seems to be an almost desperate striving among some (maybe many) for a politically produced rather than religious road to salvation.

Douthat does acknowledge the potential power of what he calls cultural Christianity. "A more fully Christian politic would be a powerful witness for the faith. Political power can lay the social foundations for religious growth. and a healthy church inevitably generates a 'cultural Christianity' that draws in cynical and half-hearted figures as well as true believers."

Even so, suggests Douthat, that possibility presupposes a situation somewhat different from what we seem to be experiencing right now - at least according to his analysis. In contrast to classically successful experiences of cultural Christianity, Douthat argues that "when the church itself is unhealthy or poorly lead, a plan to start its revitalization with secular political actors and cultural Christianity - with Donald Trump and Eric Zenmour presumably - seems destined for disappointment. (Zenmour is non-religious, right-wing French politician who is currently candidate for the French presidency in next year's election.)

Regardless of what one makes of Douthat's take on particular leaders of Christian churches - about whom he may n some cases be excessively harsh - his larger point seems in principle well taken.

I am reminded of Cardinal Lamberto's pebble in the third Godfather movie. In conversation with Michael Corleone, Cardinal Lamberto picks a pebble out of the water and breaks it in two. While the outside is smooth and wet, the inside is completely dry, completely unaffected by the water in which the stone has been sitting. The Cardinal uses this as an image for how Christianity has been the European ambience for centuries, seemingly without penetrating deeply into people themselves.

Douthat employs an interesting analogy with the rise of progressive "wokeness," whose "cultural advance has had political assistance, but it began with that most ancient power - the power of belief." Analogously, "if similar numbers of previously secular Americans were suddenly endorsing Christian doctrine we would rightly call it a revival." Douthat's point is that political power, while it obviously played a part in Christianity's successes, was never its principal resource. He cites Saint Thomas Aquinas, for whom "the most efficacious argument" in support of Christ's divinity is precisely that "without the support of the secular power he has changed the whole world."

What French and Douthat are doing - in their different ways - is to highlight the imperative for Christian Churches to get their houses in order, so to speak, and somehow figure out how to respond to growing disaffiliation by being what at their best they purport to be, what French calls "not just a story of. hope, but the story of hope ... indispensable and irreplaceable" - and most certainly not replaceable by politics.

Addressing the opening session of the Second Vatican Council in September 1963, Pope Saint Paul VI described the Council's starting point and goal as "that here and at this very hour we should proclaim Christ to ourselves and to the world around us: Christ our beginning, Christ our life and our guide, Christ our hope and our end." That, not a pointless striving for ecclesial control of political power, remains the heart of any program for a "healthy" Church to heal a divided world.