The Deadly Frivolity of Isolationism - Then and Now 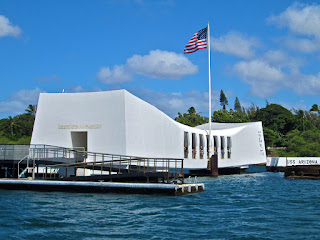 In modern American history, there have been three traumatic occasions which have caused many people to say they remembered exactly where they were and what they were doing when they heard the news - "9/11," John F. Kennedy's assassination on November 22, 1963, and the Japanese attack on Pearl Harbor 80 years ago today on December 7, 1941, FDR's famous "day that will live in infamy. Of course, I myself can recall only two of those days, and the number of those still around after 80 years who can recall Pearl Harbor is rapidly diminishing. Like so many memorable historical dates, it is an anniversary we increasingly pay less and less attention to.
Both Pearl Harbor and "9/11" were instances of attacks upon the U.S. that inevitably invited recriminations by those who wondered why we had not been better prepared, in effect why we had not known in advance (as if that particular manifestation of prophetic skill were a routine endowment to be expected in our leaders). In fact, there were warnings of a sort prior to Pearl Harbor and the likelihood of imminent war with Japan was recognized in Washington. In retrospect, the possibility that Pearl Harbor might be attacked (as opposed to the more obvious and more conventional targets like the British and Dutch Pacific possessions or even the U.S. owned Philippines) might have warranted greater credibility.  What in fact the Pearl Harbor experience (and later the "9/11" experience) both illustrated was how hard it is to anticipate what has never happened before and hence remains de facto unimaginable. (Once it happens, of course, then everyone can claim that it was obviously destined to occur and should have been expected!)
What is likewise easy to understand, if less easy to justify, was the overall spirit of complacency - what I like to call the deadly frivolity of isolationism - that still so dangerously characterized the wider American society that fateful Sunday morning. It wasn't as if it wasn't already evident how dangerous the world had become or how high the stakes were. Yet Americans still believed - because they wanted to believe - that that they were special enough to be spared.
That same deadly frivolity of isolationism is evident again in our approach to this global pandemic. How really dangerous the new omicron variant may actually prove to be remains unknown as yet. What we do know, however is that the vaccination rate in Africa (where the new variant was first detected) is pathetically poor, and that as long as many remain unvaccinated the virus will have many more opportunities to mutate. We know that already, and there is nothing surprising or counter-intuitive about that fact. Unlike the surprise at Pearl Harbor, we already have enough experience with viruses to know exactly what lies in store if we fail to vaccinate everyone everywhere. Yet our business-as-usual approach - coupled with our depraved capitalist idea that health care is, first and foremost, supposed to be about rich corporations making more and more money, and our default psychology of isolating individualism (isolating from one another here at home and from other nations) - have blocked us from doing what is, in fact, definitely doable. The is not the deadly 1918 flu pandemic afflicting a world without sufficient scientific and medical alternatives. Thanks to the amazing effectiveness of modern science, modern medicine can effectively limit the spread of this disease and in the process limit the likelihood of more dangerous mutations. but like the American people 80 years ago, we prefer the deadly frivolity of isolationism - in spite of all evidence pointing to its inevitable failure.
The infamous Japanese attack on Pearl Harbor finally jolted the U.S. out of its irrational complacency. Quickly the country turned itself around from frivolous isolationism to wartime seriousness and eventual victory. In his memoirs, British Prime Minister Winston Churchill reflected on the magnitude of the change and what this meant: "Britain would live; the Commonwealth of Nations and the Empire would live. ... We should not be wiped out. Our history would not come to an end."
After almost two years of this pandemic, more than 5 million deaths worldwide, and more than 700,000 U.S. deaths due to this deadly disease, with billions around the world still unvaccinated (not to mention far too many here at home who have easy access and hence no excuse), what will it take to jolt us once and for all from this slough of complacency, from the deadly frivolity of isolationism?
(Photo: The U.S. Arizona Memorial, Peral Harbor)
Posted by City Father