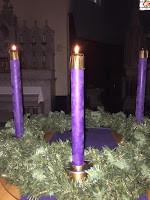 For Fr. Alfred Delp in 1941 Munich, the 1st Sunday of Advent was about being "shaken." Building on that theme on Advent's 2nd Sunday, Delp admonished his hearers to reflect on authenticity: "In the presence of the Ultimate the only thing that survives is what is authentic. All compromise shatters there. All cheap negotiating shatters there. All half-truths, and all double-meanings, and all masks, and all poses shatter there. The only thing that stands the test is what is authentic."

The following year, he elaborated further: "it is our responsibility to make a disturbance in the world that is strong enough in itself to tear this chaos out of its cycle and to lead the world back to its source. Christians bear the responsibility to generate an authentic unrest within creation, through our existence, our word, and our work." Midway through the 20th-century's mosts destructive war, he challenged his hearers: "We are obliged to be concerned about the destiny of the world. Moreover, we must know that we gamble away our own individual salvation if we don’t play, or, to word it better, if we don’t fight, for salvation and order in the world."

He then quoted from a letter from an unnamed officer serving in the war with no claimed connection to the Church: "From the wreckage of the medieval world view, the inevitable conclusions will be drawn." While disagreeing with some of the officer's analysis, Fr. Delp invited his hearers to enter into the letter's larger critique and asked: "Who has ever considered that the wonderful story of the Lord, the Kyrios, is not complete, but that His birth, suffering, and death should be continuing to happen anew within us and within our Church—and that then we would escape the danger of historicization, as though Christianity were merely a panacea for the old folks?"

Two years later, meditating in prison on the liturgical texts used at that time on the 2nd Sunday of Advent, he wrote: "the great and personal hours of grace will always mean some form of awakening and return to a true order of reality. This is also the meaning of Advent: not only promise, but rather conversion and transformation. ... The prayers and messages of Advent push man out beyond every surface and bring him to a consciousness of the full sculptural dimensions and drama of his situation." In the Mass texts for that Sunday, he discerned "three clear statements:

The first: "God’s promise to continue this movement toward man. God is always the One who is coming, but not just some day in the future; He is right now, and always, in the process of coming"

The second: "This has nothing to do with trivializing or flattening life out, as if there were some bourgeois existence connected with the divine. God’s blessing takes neither the pleasure of freedom away from us, nor its burden. The encounter with this God who wants to save is not arranged according to our discretion, nor in the way or the place we might choose."