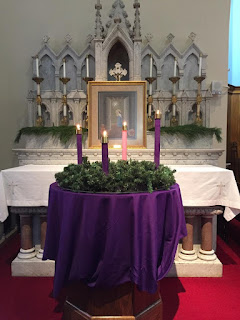 We no longer hear Luke's great account of the beginning of John the Baptist's public ministry on the 4th Sunday of Advent, as was the case for so many centuries and was still so in Alfred Delp's day. That) particular pericope is particularly famous for its list of some of the relevant political power of the day, beginning with the Emperor, presumably to situate the Gospel story int he specifics and particularity of its human time and place. At the same time, it offers an alternative to the claims of salvation through politics - a message obviously of particular relevance on 1940s Germany, but also of special relevance here and now. As David French wrote just yesterday, reacting to yet more statistics on the subject of religious disaffiliation especially among those without college degrees: "I suggest that our nation’s increasing political zeal is fundamentally misplaced? Could I suggest that as religious and civic engagement declines, too many Americans are replacing religion with politics, and the false god of politics does not present the answer for what ails our hurting nation?" ("The Wounds Politics Cannot Heal" - https://frenchpress.thedispatch.com/p/the-wounds-politics-cannot-heal?token=eyJ1c2VyX2lkIjoxMTYxOTMxNSwicG9zdF9pZCI6NDU3MDI0NTcsIl8iOiI2cTdDdyIsImlhdCI6MTYzOTkyMjUzOSwiZXhwIjoxNjM5OTI2MTM5LCJpc3MiOiJwdWItMjE3NjUiLCJzdWIiOiJwb3N0LXJlYWN0aW9uIn0.UBHZ0xXa0Xe7izXvfrLt2P-d4jxT1rJSQM-RmA7yhfI ).
For Fr. Delp, preaching in Munich in 1941, this final week of Advent represented "a fourth call to mankind, to our very being. ... a call to bring reality into the order it should be in, if we want to meet the Lord and if we really are practicing Advent—which means being under way, seeking, and waiting." He contrasted the figure of John the Baptist with his contemporaries who sought "to build temples to the divine emperor," and with Pontius Pilate, "the man who had only one priority in his life: to remain a friend of Caesar," with the other pagan powers of the day, and with the ruling religious establishment in Jerusalem (also mentioned by Luke), who showed "not only was there no hope from worldly power, the holy place was also sold out."
"Think of it," asked Fr. Delp: "Tiberius, Pontius Pilate, Herod, Philip, Lysanias, Annas, Caiaphas. When was there a more hopeless hour?" Was her perhaps suggesting a similar unease about his own, hardly hope-filled 1941 Europe? How might we hear this in our own morally challenged political and religious time?
Preaching in Munich again a year later, Fr. Delp challenged his wartime (and perhaps war-wary) congregation against "concealing Christmas behind bourgeois customs and sentimentality, behind all those traditions that make this holiday dear and precious to us." In a message every bit as timely now as then, he asked his hearers to recognize in this holiday celebration "the founding of a final order for the world, a new center of meaning for all existence. We are not celebrating some children’s holiday, but rather the fact that God has spoken His ultimate Word to the world. Christ is the ultimate Word of God to the world."
Two years later, meditating while imprisoned in Berlin on this final Advent Sunday, which was to prove to be his last, he again recalled this historical context highlighted by Luke's Gospel, which "enumerates the power brokers who determined the structure of the small sphere where the light was about to appear and salvation would be proclaimed." He recalled "a hopeless moment in history is signaled here. It was hopeless from Caesar’s throne all the way down to the guards of the temple sanctuary." Yet, "while history was so hopeless and unspiritual all the way into the sanctuary of the Lord, then the Word of the Lord came to John."
Posted by City Father