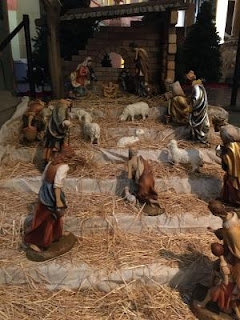 In the tender compassion of our God, the dawn from on high shall break upon us, to shine on those who dwell in darkness and the shadow of death, and to guide our feet into the way of peace (Luke 1:78-79).

Way back when I was a parish priest here at Saint Paul’s, I was part of a monthly book discussion group. One December, our book was, Mr. Ives’ Christmas, by Oscar Hijuelos. When it was published in 1995, one reviewer compared Hijuelos to Dickens and called his novel a “’Christmas Carol’ for a crime-ridden, ethnically divided urban America.” It told the story of Edward Ives, a commercial artist at a New York advertising agency and his wife and family living in Morningside Heights, who had been abandoned as a baby, raised in a Catholic Foundling Home, and finally adopted just before Christmas in 1924, all of which had left him with an intense desire for a family of his own.

The central event in the novel is the killing of Ives’s 17-year-old, seminarian-to-be son, shot coming home from choir practice at Ascension Church a few days before Christmas 1967. The loss of his son sends Mr. Ives into decades of mourning and grief, from which he eventually emerges by the grace of forgiveness, receiving redemption himself through forgiving his son’s murderer. As Christmas stories go, it has it all – family and faith, testing by tragedy, and redemption by grace.

Like so many of us, Oscar Hijuelos loved Christmas. In the chaotic 1960s, he cherished his Christmases with his best friend’s family. In later life, he and his wife loved decorating their tree with ornaments collected during their travels. “When we looked at the tree,” his widow later said, “we saw our life.”

And don’t we all in different ways do that too – as each Christmas comes as a kind of gift to us?

I think we all want our Christmases to be perfect. That perfect Christmas-card family picture is one way of saying to the world (and maybe reassuring ourselves) that everything is really OK. In fact, however, and not just in novels, Christmas is often celebrated in less than optimal conditions – by those (like Mary and Joseph) who are homeless and have only strangers for company, by the lonely and those who mourn, by the sick, by immigrants far from home, by refugees in temporary camps that have a way of becoming permanent, by soldiers at war (like my own father, fighting at the Battle of the Bulge, in what one historian called “the worst Christmas for American soldiers since Valley Forge”).

We’ve all heard the saying 90% of life is just showing up.” That’s what God did on Christmas. He showed up in a somewhat out-of-the-way place, under the less than optimal conditions so often experienced by poor immigrants and refugees then as now - and with just some shepherds (hardly a high-end audience) taking notice.

But God didn't just show up; he stayed with us! He stayed with us for the long haul. He stays here in his Church! And that's what makes it possible for us, as his Church, to show up ourselves, despite whatever obstacles we've put in God's way, to continue what he started back then, to continue what he started here and now in our world today, this Christmas, this year, and every year – uniting heaven and earth, spanning space and time, past, present, and future in one communion of saints, one universal network of friendship with Christ.

When, at the end of the story, Mr. Ives visited and reconciled with his son’s killer, in that moment, the reader is told, “Ives knew, his son was somewhere in that room, and approving of what he beheld.” The God who became incarnate in Jesus is inviting us this Christmas to become incarnate in our world – to overcome whatever barriers remain between us, between young and old, rich and poor, healthy and sick, native and immigrant, friend and foe.

So every time we hear and celebrate the Christmas story, may it truly become our story. May it challenge us to bring the brightness and beauty we experience in this church with us back outside and so to reimagine our world – and so transform our frustration into fulfillment, our sadness into joy, our hatred into love, our loneliness into community, our rivals and competitors into brothers and sisters, and our inevitable death into eternal life.