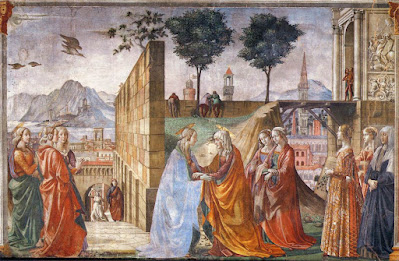 After the horrible hiatus of the covid pandemic and despite its continuing dangers, this week once again many people all over America and the world will be visiting family or friends for Christmas. For, whatever else is happening, this is, as that great 19th-century fan of Christmas, Charles Dickens, delightfully described it: “a good time; a kind, forgiving, charitable, pleasant time; the only time … on the long calendar of the year, when men and women seem by one consent to open their shut-up hearts freely.” So what more fitting Gospel account for this final Sunday before Christmas than the forever familiar story of Mary’s family visit to Elizabeth?
On the other hand, as we all well know, holiday visits are not always what we would like them to be – whether for the visitors themselves or for the ones being visited. It’s hard sometimes to show affection when affection is not so fully felt, or – especially in this period of intense political polarization and division - to come up with the right words that won’t cause or exacerbate conflict! Sometimes, opening our “shut-up hearts” may be difficult, undertaken only grudgingly – more a matter of duty than desire – or, more likely some confusing combination of the two. How fitting, then, to hear today about a visit by one person whose motives, we know, were never mixed!
The traditional site of Zechariah and Elizabeth’s home and so the presumed site of the Visitation is the little town of Ain Karim, some 5 miles west of Jerusalem – a journey at that time of several days from Galilee through Samaria to Judea. Obviously, we cannot know now exactly what Mary may have felt as she undertook that difficult journey, in response to God’s plan that had been revealed to her by an angel. The story says she set out in haste. No procrastination, no putting off what, to our “shut-up hearts,” might seem merely a dutiful but burdensome social obligation. Perhaps, she sought to draw on the wisdom and strength of her older relative. Surely, she must have wanted to make contact (in a world without Facebook and Twitter) with the only other person who had thus far been let in on God’s great plan, that was even then quite literally taking shape in the bodies of these two remarkable women.
After so long, Elizabeth in her old age had also conceived a son - and had responded to this incredible favor by going into seclusion. Also unexpectedly pregnant, Mary responded to this problematic and potentially dangerous development differently - by rushing off to visit Elizabeth.
Instead of shouting her good news to the world (which until then had reproached her for being childless), Elizabeth waited silently for the miracle’s full meaning to make itself known. Instead of cautiously keeping quiet, Mary rushed to tell all to Elizabeth, thus showing her own complete confidence in the God who had totally taken over her life.
What a wonderful story, this episode in the greatest story ever heard, this story that every year at this time demonstrates its incredible capacity to command our attention and touch us where we feel it most deeply!  Every year, despite all the tragedies and difficulties that get in the way, all sorts of people, all over the world, with different personalities and preoccupations, different needs and wants, different fears and hopes, hear the Christmas story and are captivated by it - for it speaks directly to each one of us, reviving our capacity to believe and our willingness to hope.
Back in 5th-century Christian North Africa, one of the great Doctors of the Church, St. Augustine, said: “If God’s Word had not become flesh and had not dwelt among us, we would have had to believe that there was no connection between God and humanity, and we would have been in despair.”
That is what the Christmas story is all about – a chance not to despair, an incentive to hope. The God for whom Elizabeth silently waited for so long, the God whom Mary carried in her womb so faithfully, has come at last to live with us. In the process, he connects us not only with him but with one another. As he brought Mary and Elizabeth together, filled with the Holy Spirit, so he leads us to one another and unites us, thought the same Holy Spirit, in a new community, formed by faith, directed by hope, and alive with love. And we, as a result, must never let things be the same again!
And they won’t be - and we won’t have reason to despair ever again - if, like Elizabeth, when we hear him coming, we offer him the hospitality of our hearts, and if, like Mary, having conceived him in our hearts, we are willing to carry him into the world with confidence – so that, through each of our no longer “shut up” but now wide open hearts, Christ can truly be our hope and become so for all the world.
Homily for the 4th Sunday of Advent, Saint Paul the Apostle Church, New York, December 19, 2021.
Photo: Domenico Ghirlandaio (1449-1494) The Visitation, Fresco, Cappella Tornabuoni, Santa Maria Novella, Florence.
Posted by City Father