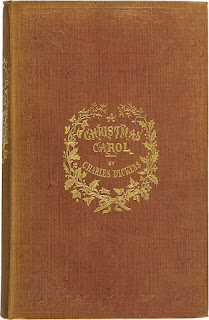 Christmas is now a mere 10 days away. So, last week, I watched (as I do every year) the black-and-white 1951 film version of Charles Dickens' 1843 Christmas classic, A Christmas Carol, starring Alastair Sim, which was my father's favorite film version of Dickens' story. (Interestingly, it was originally something of a commercial flop in the U.S., but it soon became a standard staple of holiday TV, which was where I first encountered it.) I am also very fond of the the 1938 film adaptation starring Reginald Owen, which, however, does deviate more from Dickens' original.

I’m guessing that everyone has his or her favorite Christmas movie – A Christmas Carol, It’s a Wonderful Life, The Bishop’s Wife, How the Grinch Stole Christmas, etc. I guess mine is Miracle on 34th Street - for the very personal reason that I owe my existence to Macy’s.  My parents were both employed by Macy’s in the autumn of 1946 when they met there at a soap sale – the first big soap sale since the end of the war. For my father, it was love at first sight. Soon he was taking my mother on their first date – to the Radio City Christmas Show. They were engaged just before Christmas, and were married two months later. As Macy’s employees, my parents (along with many others) sat under the lights for what seemed like forever as part of the invisible background crowd for the cafeteria scene in Miracle on 34th Street, when Kris Kringle came face-to-face with the insidious power of post-war psychological correctness.

Christmas movies often feature otherworldly kinds of characters – Charles Dickens’ famous spirits of Christmas Past, Present, and Future, for example. In Miracle on 34th Street Kris Kringle may indeed be Santa Claus, but he lives in a residence for senior citizens on Long Island. While he accomplishes a tremendous transformation in the people who get to know him, he does so in quite an ordinary, human way – by doing the sorts of good things those other people would never have done had it not been for his presence in their lives.

At the main Mass of Christmas, the Mass on Christmas Day, the Church prays that we may share in the divinity of Christ, who humbled himself to share our humanity. Like Kris Kringle, but to an infinitely greater degree and on an infinitely grander scale, Jesus Christ, the Savior of the world, whose birth we will soon celebrate at Christmas, changes the lives of all who will let him. He reveals what it means to be human and enables us to be and to do what we would never have been or done on our own, had he not become one of us. He reveals what it means to be God and enables us to be reconciled with the God who is so in love with us that he has chosen to be one of us. The Christmas story is the story of God’s own Word, becoming what he himself had created, truly God and truly human, Emmanuel, God-with-us. This is the Christian faith, which we profess, proclaim, celebrate, and share with the world at Christmas and all year long.